“It’s all doves with laurels flying over a tank.”CCGB doyen, Les Lilley.

The Knokke-Heist Cartoon Festival sets up camp on a Belgium beach promenade each Summer. On display are two major exhibitions including their International Competition. Knokke & Heist are conjoined seaside towns on the sandy channel coast. In recent years I’ve dropped by their shiny plastic tent to dawdle & gawp. Last year, perhaps unsurprisingly no Union Jacks adorned the flag poles outside. Indeed in the last two years only two UK Cartoons were on show, both from the same artist. I’m genuinely unsure whether this reflects recent spats with FECO, indifference or nothing in particular. Alas I’ll miss this years 58th show as my annual road trip falls after it closes. A couple of visits to Cartoon Fest does not a critic make, I’m no Brian Sewell, though I do have a red face & talk bollocks… 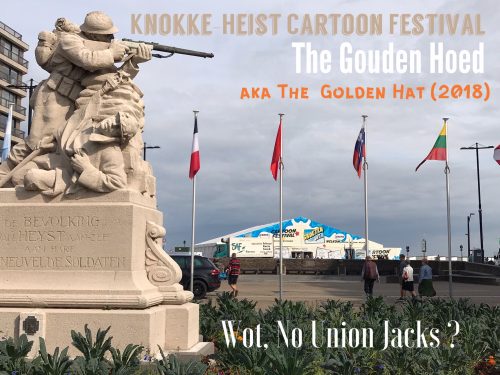 The Festival features 2 x shows. A selection of Belgian editorial cartoons & the International ‘Gouden Hoed’ (Golden Hat) Cartoon Exhibition. Facsimiles of the cartoons are interned within the fabric of plastic panels in the marquee. 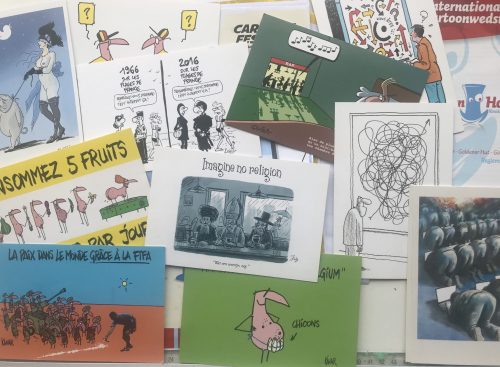 The Belgium press cartoons are helpfully translated into English, French & Flemish. Our European pals across the Channel share our liberal sensibilities & disdain for authority. In the wake of ‘Charlie Hebdo’ & outrages in Brussels Belgian Cartoonists seem less ‘sensitive’ in their representations of terrorism, terrorists & sexual politics. I’m aware there are fault lines between Belgium’s French & Walloon populations but lacked the nous to spot evidence of this in this display. The Politico-Social Cartoons were lively & vibrant. The impudent pocket cartoons almost poke you in the eye. Whilst I can’t be sure, my impression is the cartoonists aren’t entirely on the same page. I found this refreshing & imagine them (perhaps unfairly) as dysfunctional hissing cats. The general direction was ‘look at what those prat politicians are doing’ but, there were a couple taking wicked potshots at demented demonstrators. The sexual quotient was more muted than I anticipated but in the shop there were postcards that would have Donald McGill gagging on his little stick of Blackpool rock.

Linguistic gymnastics are almost superfluous in the larger International show. Most artwork carries no captions and little text. In attempting to reach out to all, artists opt for high visual impact and political caricature. 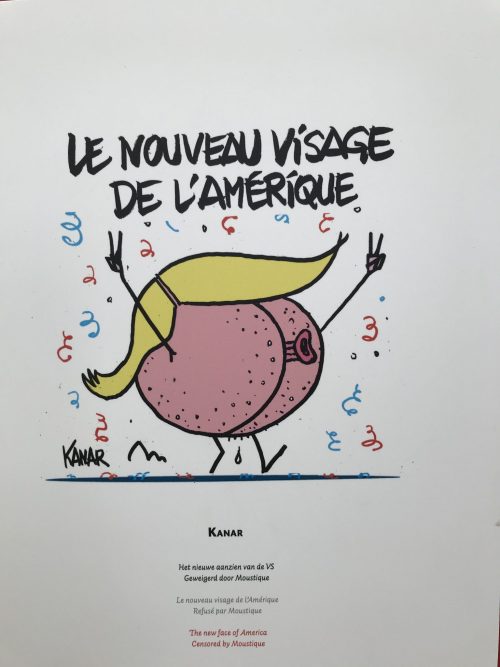 We in the West seem to be indulging in bouts of self flagellation & unseemly flirtations with shameless snake-oil salesmen. I like Rich Hall (Melty faced US Comedian) but don’t agree with his tirade against Political Cartoons. Much on display at Knokke-Heist is absolutely glorious. But however gorgeous the artwork or compelling the theme, viewing multiple Donald Trumps somewhat dulls approbation.Some International Contributors whilst happy to take a swipe at ‘his Orangeness’ may be transmitting more nuanced messagesabout repression. In the UK our ability to lampoon without fear of grim consequence was hard won. 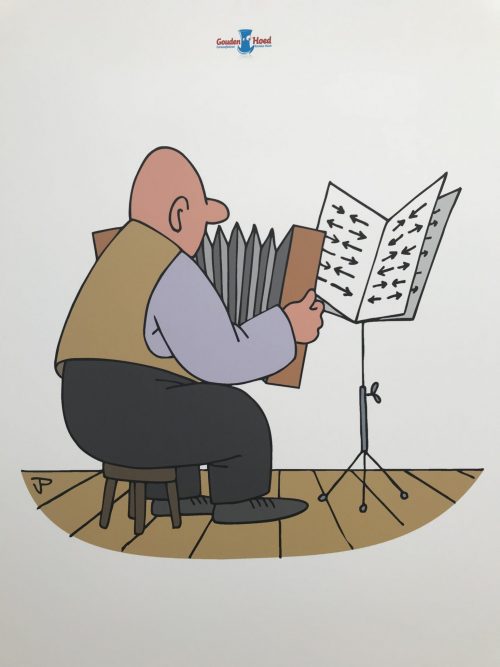 It’s foolish to draw conclusions about a show chosen by panel from global Cartoon submissions. One embarrassing anomaly being the Brazilian cartoon that appeared inthe 2017& 2018 catalogue! It is remarkable however, that so much content comes from countries that might euphemistically be considered to have‘authoritarian regimes.’Whilst Mr Putin was another predictable ‘aunt Sally’ other obvious brigands & despots were noticeable by their absence. My prejudice on this was informed by remarks made at a recent PCO hosted event. The fear of giving offence is not just about personal safety but genuine anxiety about the implications for family members, even if that cartoonist is exiled. Cartoonists elsewhere may live with harsher sanctions than an ugly Twitter-storm. 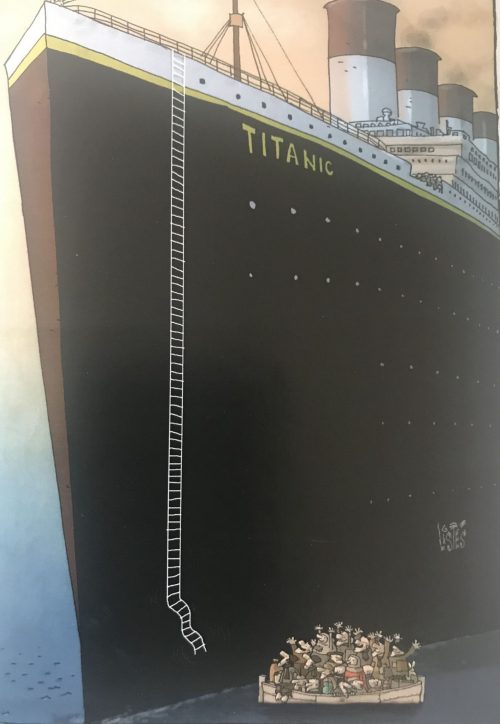 Visiting this exhibition is a rewarding & enjoyable way to spend a couple of hours. Humour is subjective & was not entirely obligatory. The artworks went from animated squiggles to epilepsy inducing tapestries of colour. There were a sprinkling of earnest graphic statements but most works had humorous intent. Cartoonists from Iran & Turkey were especially numerous with an exquisite variety of work. We all understand that an apparently tossed off doodle can take hours! Some of the carefully crafted Iranian Artwork was Herculean in ambition & execution. I loved the exhibition.

Les Lilley’s quote (above) was made in jest but there is truth in it. Perhaps a lack of embarrassment when illustrating occasionally naive political statements confers gravitas. If a cartoon dares to be serious it may persuade viewers to take cartoons seriously. This could explain why Continental Cartoonists can be afforded respect as artists & why ruthless regimes harass them. Me, I prefer cartoons to be funny too!

Name check: The singular British contributor was Jason McClarnin, top marks to him. 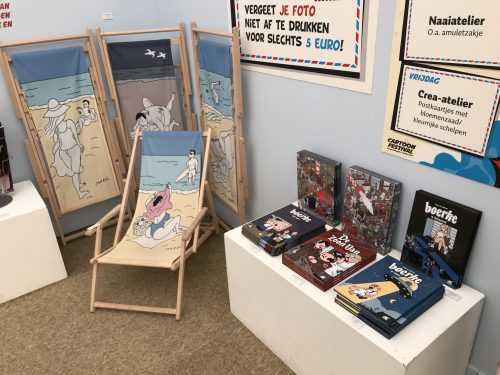 The Knokke-Heist Festival’s event is popular & well resourced. The coastal towns heavily promote it on the web, in their literature & tourist office. Cartoons seems to enjoy a cultural prestige which is absent in the UK. Belgium has surrealism ‘form’ and a fine cartoon legacy from Herge (Tin Tin) through Peyo (Smurfs) to Bob de Groot. For those grumbling about lack of markets, check out the cash prizes & consider entering by December 2019 in time for 2020!

All photos by © Des Buckley