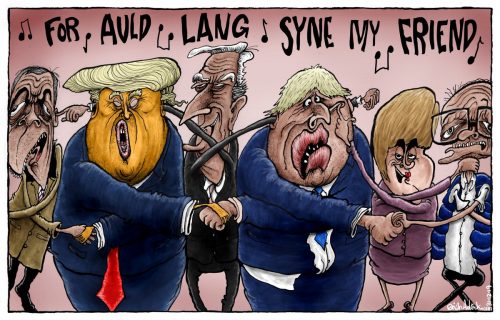 Glenn Marshall reporting from behind the paracetamol bottle:

Once more it is time to look back with the traditional (well, third year running) PCO ‘Cartoon Review of the Year’. It was always going to be a very hard task to not just fill it with cartoons about Trump and BORXIT® so in the end I just gave up and ran with it! 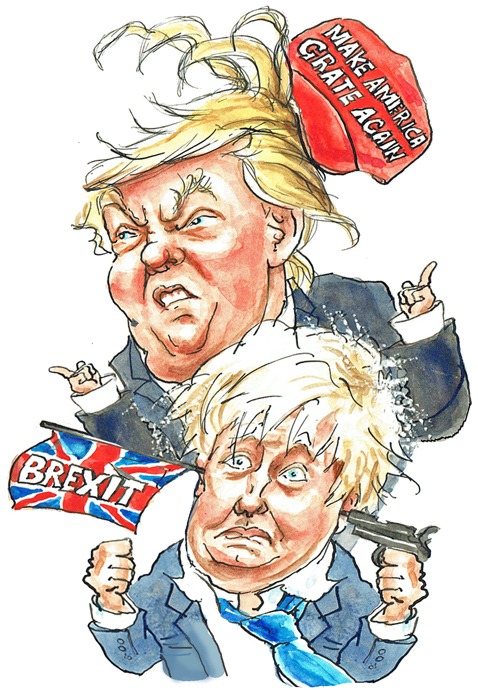 So to set the tone here’s a great drawing from © Chris Burke. 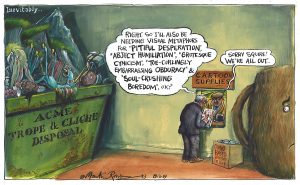 Martin Rowson sums up the plight of cartoonists facing a metaphor shortage in 2019. 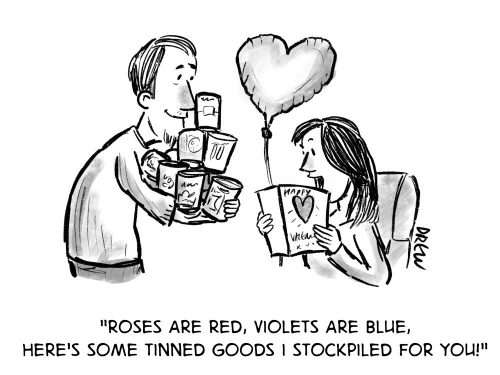 I’m having to restock my Brex-mageddon bunker as most of my haul is now well past its sell-by date. I should’ve taken © Andrew Fraser’s Valentine’s Day advice in Private Eye and just bought tinned goods rather than Greggs vegan sausage rolls and doughnuts. 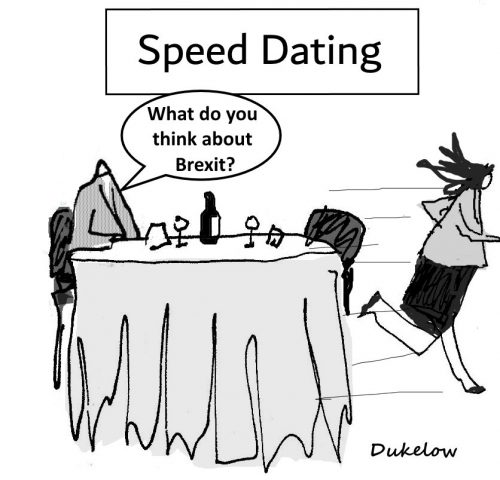 This © Colin Dukelow cartoon from Private Eye sums up what many felt about the ‘B’ word by the end of the year…probably by the beginning of the year too. 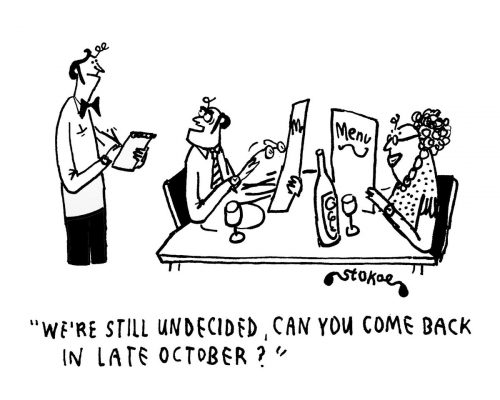 In March Brexit was taken off the menu for a few more months. Cartoon served up by © Mike Stokoe in The Spectator. 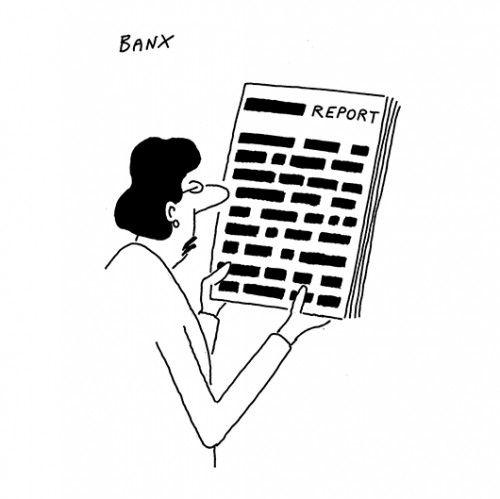 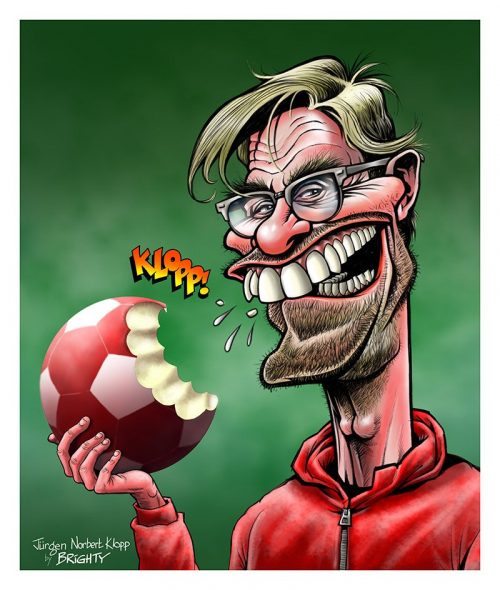 In Sports News: May saw Liverpool ‘pipped’ (GERIT?) at the post for the Premiership title by the WONDROUS Manchester City. Eat that Klopp (the PCO strenuously denies any bias in their reporters) After coming so close I really can’t see Liverpool ever winning the Premiership! (Nosramarshall) 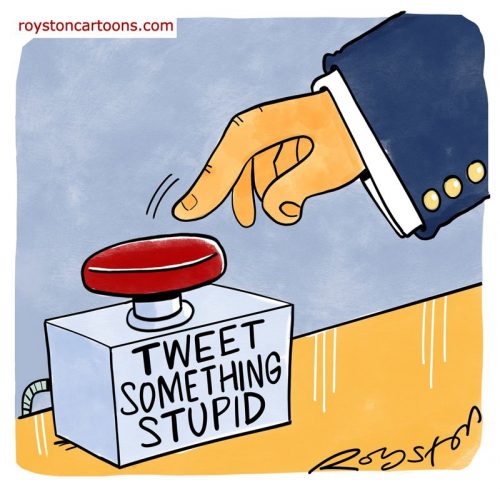 In June ‘stable genius’ Donald Trump visited the UK. © Royston Robertson shared this cartoon to mark the occasion. Really Royston could post this daily, or even hourly, and it would still be applicable. 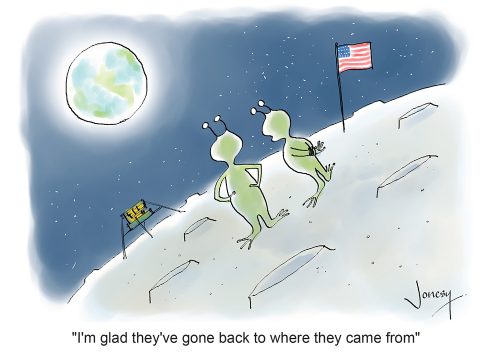 In more Trump news: In July Trump told four Democrat congresswomen ‘go back to the places they came from’. This was Steve Jones’ lunar take on it tying in with the anniversary of the Apollo 11 moon landing. (Private Eye) 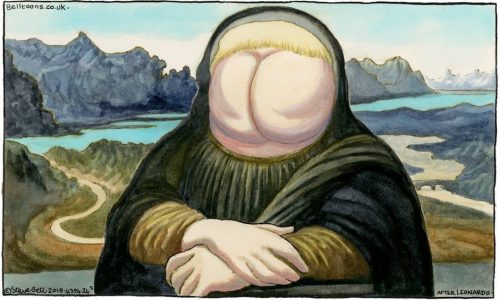 I loved this Boris arse-faced Mona in The Guardian by Steve Bell. No idea what the story was, but I’m a Mona Lisa obsessive. I’m writing this review, so I’m putting it in. 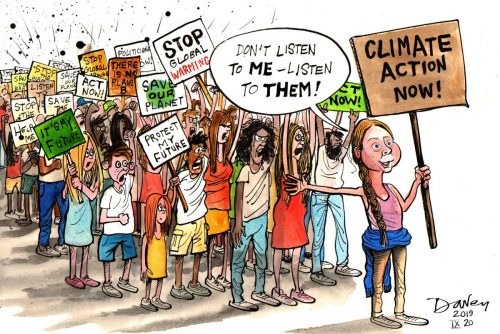 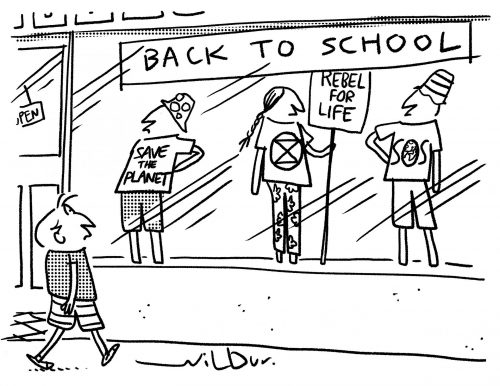 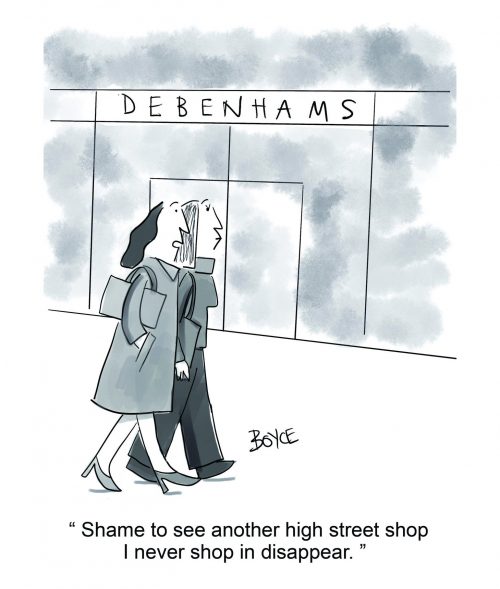 Retail News: In October it was announced that, following a spate of high street closures, Debenhams was facing financial difficulty. © Sarah Boyce may have put her finger on why with this Private Eye cartoon. 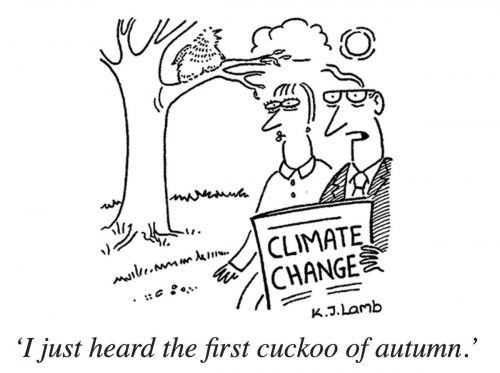 Back to climate change: © Kathryn Lamb had this seasonally adjusted cartoon published in The Spectator…. 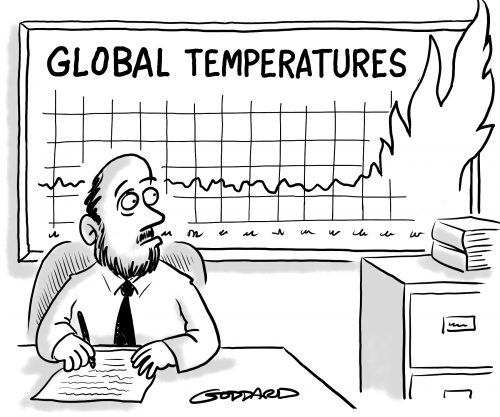 … and this inflammable Private Eye cartoon by Clive Goddard. Sadly this could be a current scene from the Australian Met Office. 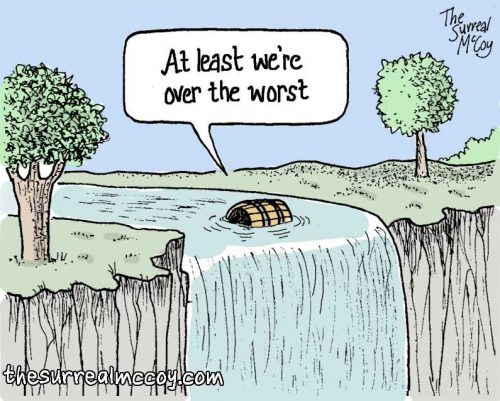 A cartoon by © The Surreal McCoy from Prospect which could virtually apply to any of 2019’s news stories. 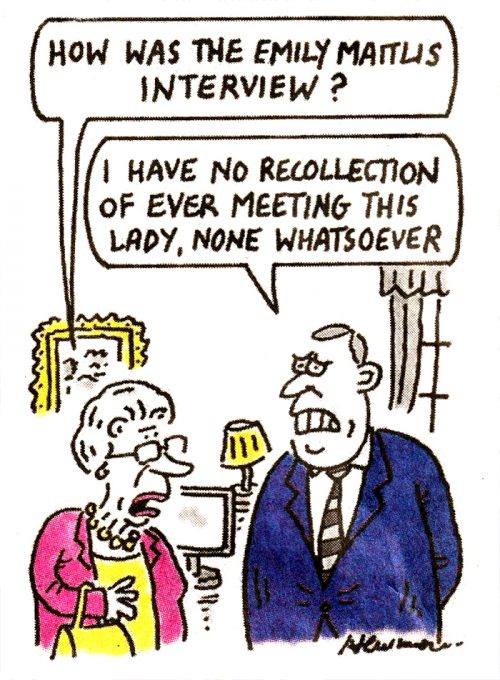 In November Prince Andrew pizza expressed his views on the Jeffrey Epstein scandal to Emily Maitlis. I suspect he’s someone else who may shy away from being interviewed by Andrew Neil in the future. 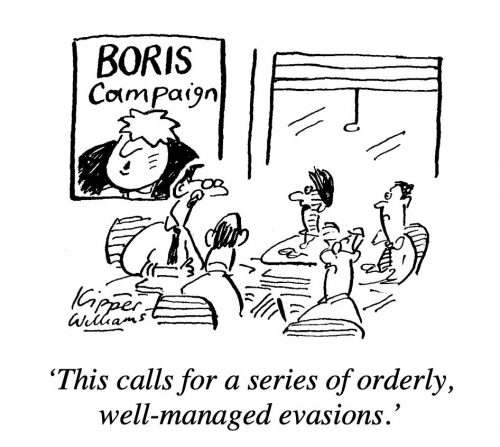 On that subject here was a rather prescient cartoon by © Kipper Williams actually from a June issue of The Spectator! 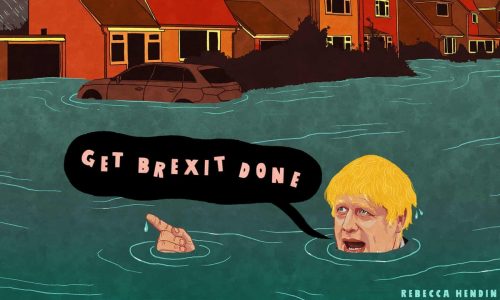 Also in November Boris visited flood-hit Yorkshire mostly to gargle his campaign message. Illustration by © Rebecca Hendin for The Guardian. 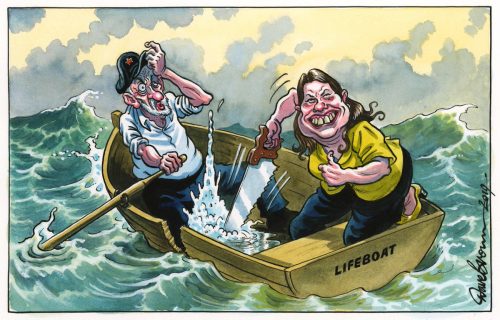 And still on matters aquatic (and to mention someone other than Bojo) here is Dave Brown’s cartoon for The Independent of Jezco and Joswin getting their campaign messages across…or not. 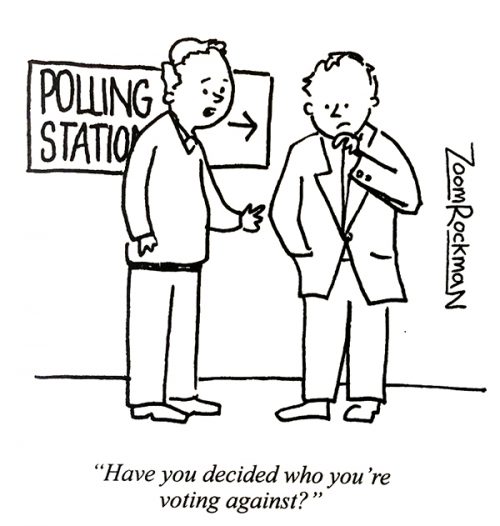 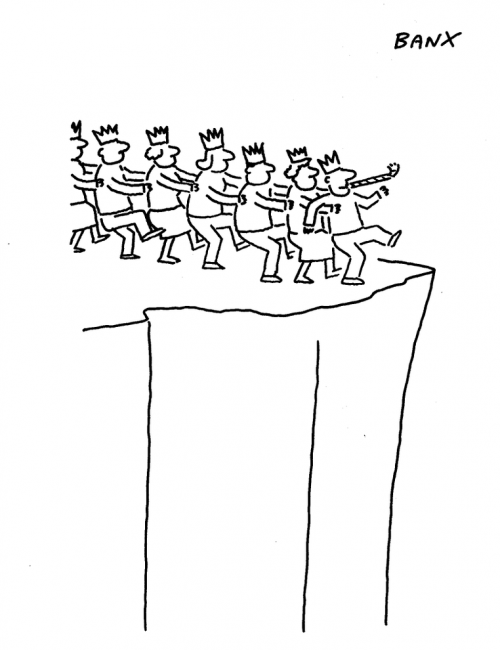 As we head into the New Year here’s another excellent cartoon by •••• from the FT showing you can get new life out of a cartoon metaphor Mr Rowson. 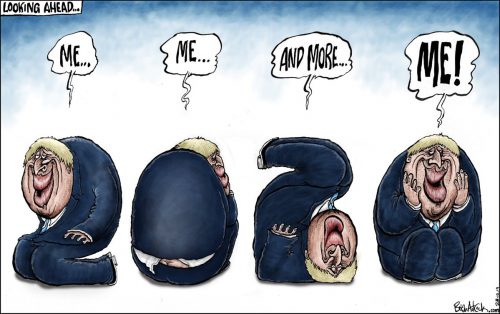 © Brian Adcock, bookends the year with this offering from The Independent.

So what fresh horrors will 2020 have in store? I expect A LOT more about him, him, and more him!

Thanks to Procartoonist members for the use of their cartoons.

Happy New Year from the PCO.