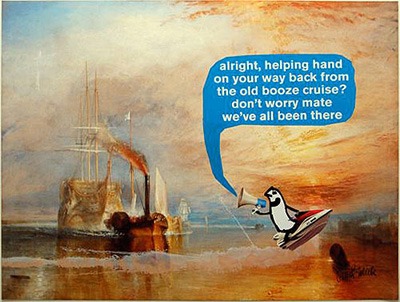 Royston Robertson reviews the Modern Toss exhibition which is at the Maverik Showroom in Shoreditch, East London, and has been extended until July 11.

In the spirit of Modern Toss, I should probably just say that this show is f***ing funny and leave it at that.

To be honest, there’s not much more than that you can say. For one thing, the mean-faced, foul-mouthed characters that populate the Toss cartoons almost deny you to make any deeper analysis. You’d risk looking like a pretentious chump (they wouldn’t say chump).

And for another, really what we have here is a lot of variations on the same gag. The joke goes like this: normal, upstanding member of society says one thing, and Modern Toss character replies with the kind of sweary abuse we all want to come out with in these situations but never do. It’s comedy Tourette’s (in fact, one of the characters takes that as his name).

There are a few pieces outside the usual formula, such as the brilliant Punctuation Networking Event, where punctuation marks chat about their traditional roles and how they’ve changes since texting and the internet, and the self-explanatory Periodic Table of Swearing. 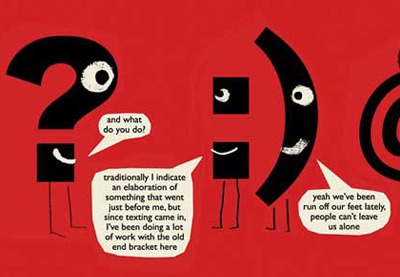 Good fun then, if a bit slight. The artwork on the walls is mainly prints which gives the whole thing a feeling of a shop rather than an exhibition. Still, it is marketed as a “Museum of Shit-Naks”, so as the Drive-By Abuser (pictured, top) might say, “Fair play to them, yeah?”