Our ‘Raise Fingers for Myanmar’ exhibition was recently shown at Saint-Just-le-Martel cartoon festival in France. This was coordinated by PCO Overseas committee member The Surreal McCoy. 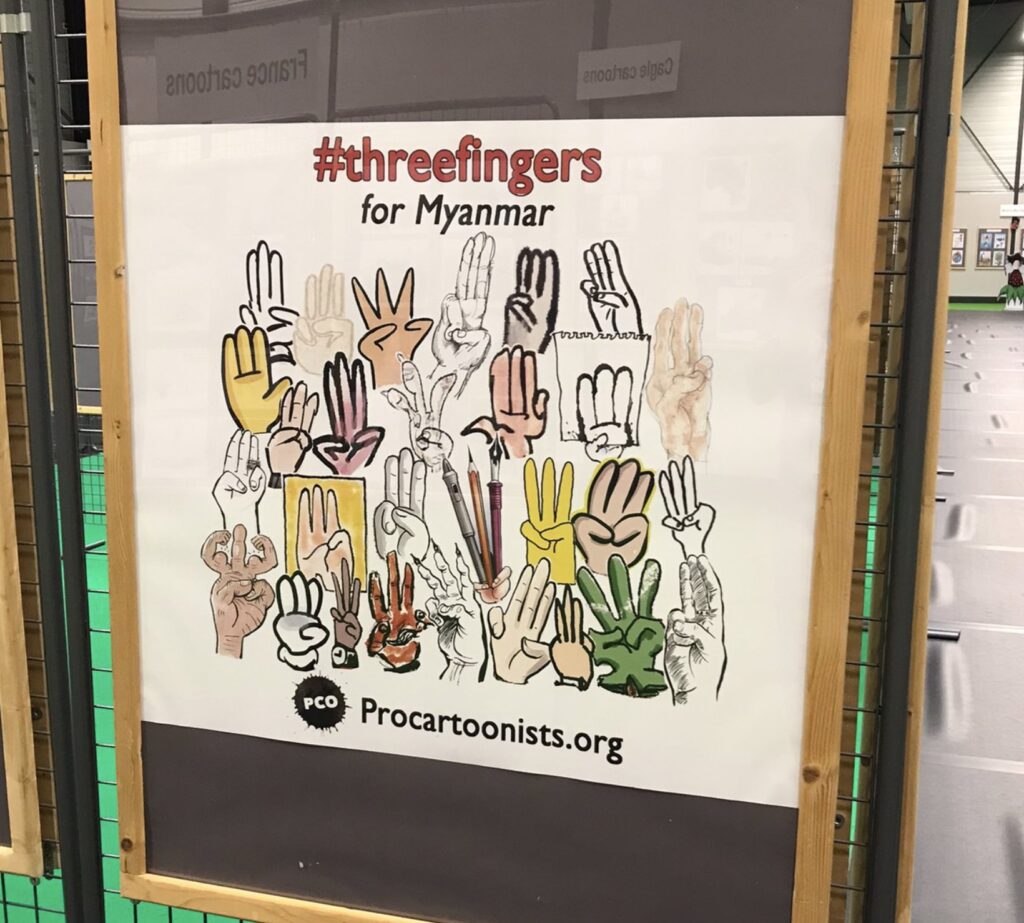 Procartoonists Chairperson Clive Goddard wrote the following on the campaign for the festival:

‘In today’s troubled world the latest horrific event to hit the headlines tends to dominate the media’s focus, overshadowing many other conflicts and abuses around the world. Myanmar is just one example.

In February 2021 a military coup took place in Myanmar sparking wide scale protests, armed resistance and mass killings. Since then almost a million people have been displaced either within their own country or having been forced to flee abroad. The country is still suffering a humanitarian crisis, violence and a rapid rise in poverty. 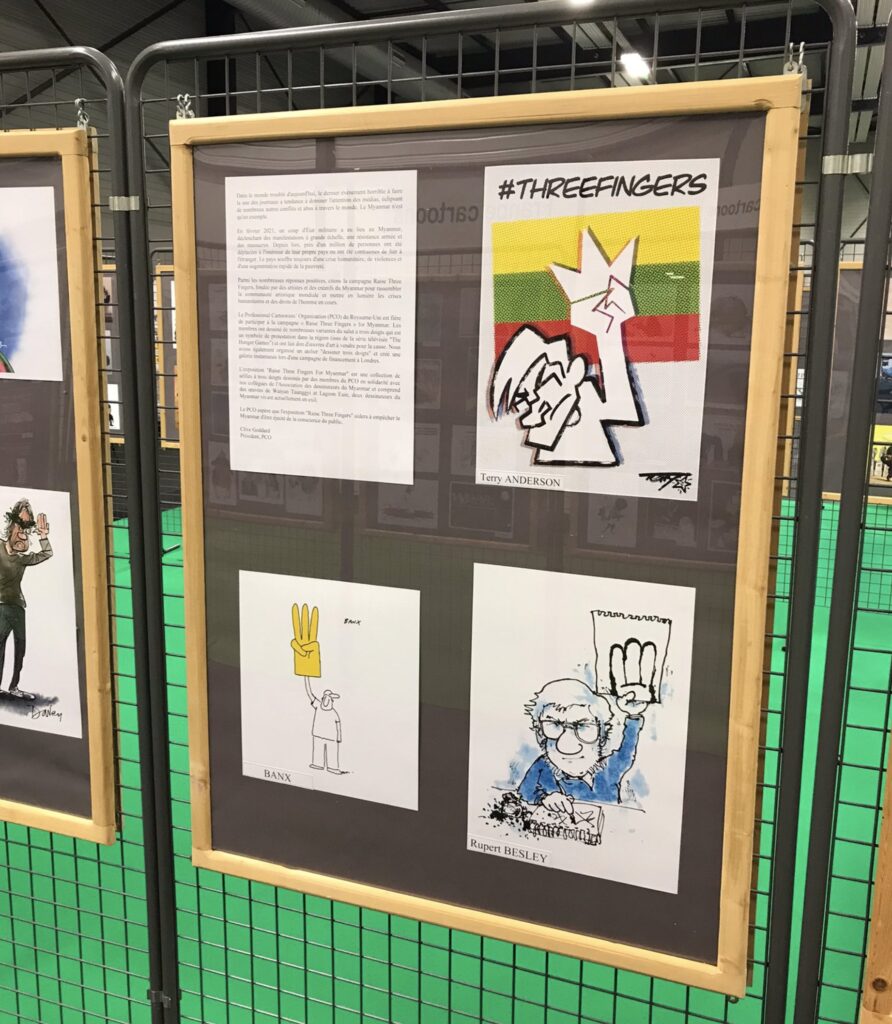 Among many positive responses was the Raise Three Fingers campaign, founded by artists and creatives in Myanmar to bring the global art community together and highlight the unfolding human rights and humanitarian crises 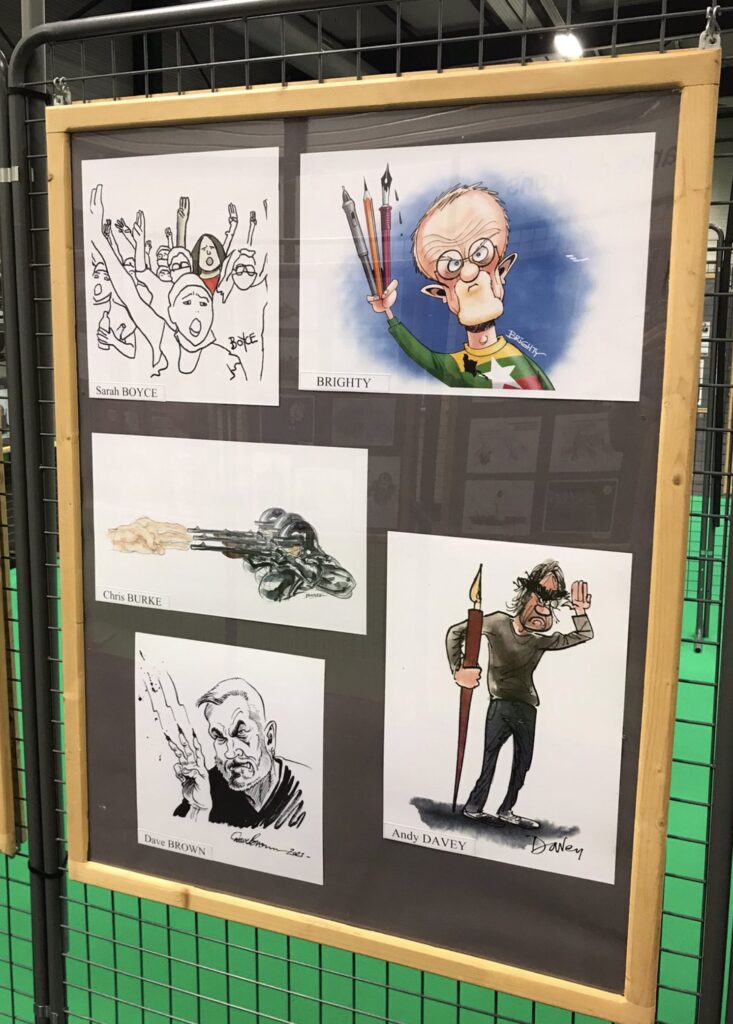 The UK’s Professional Cartoonists’ Organisation (PCO) is proud to be involved with the ‘Raise Three Fingers’ for Myanmar campaign. Members have been drawing many variations on the three fingers salute which is a symbol of protest in the region (originating from the television series ‘The Hunger Games’) and donating artwork to be sold for the cause. We also ran a ‘draw three fingers’ workshop and created an instant gallery at a campaign fundraiser in London. 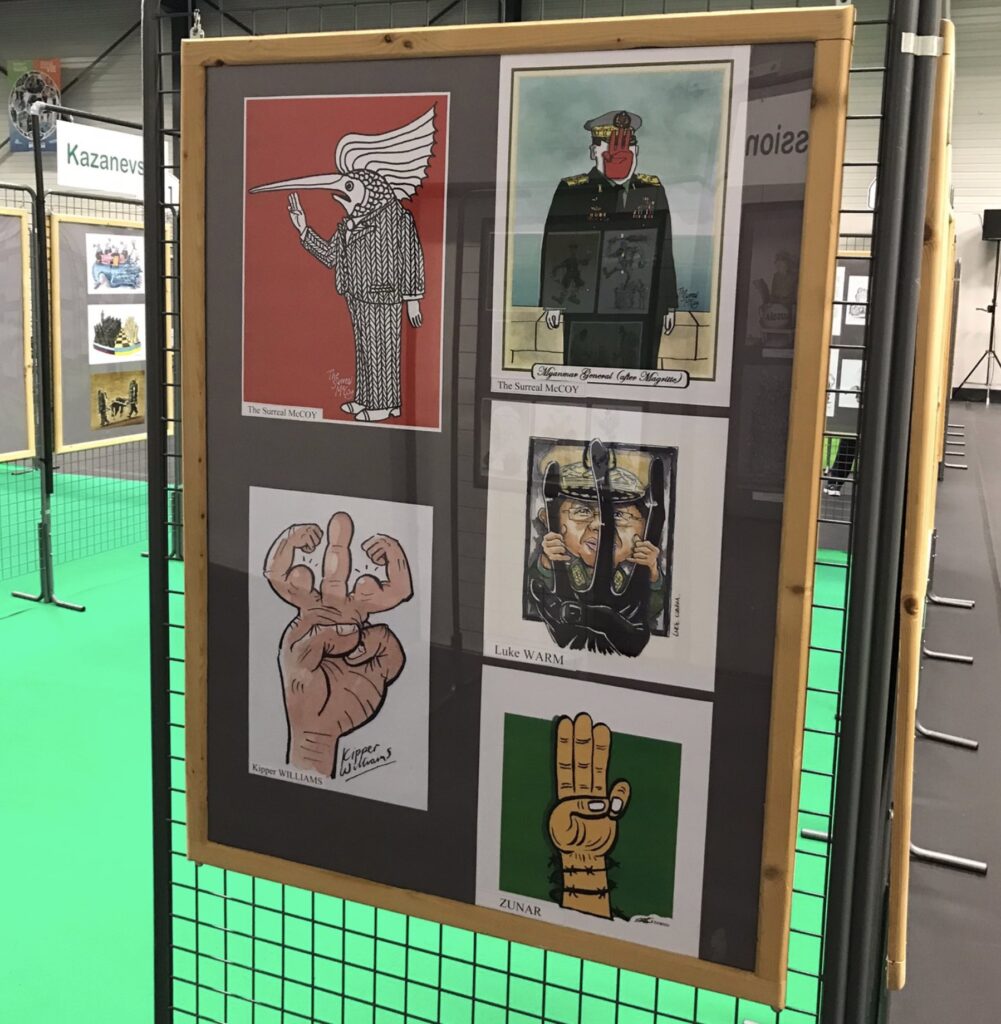 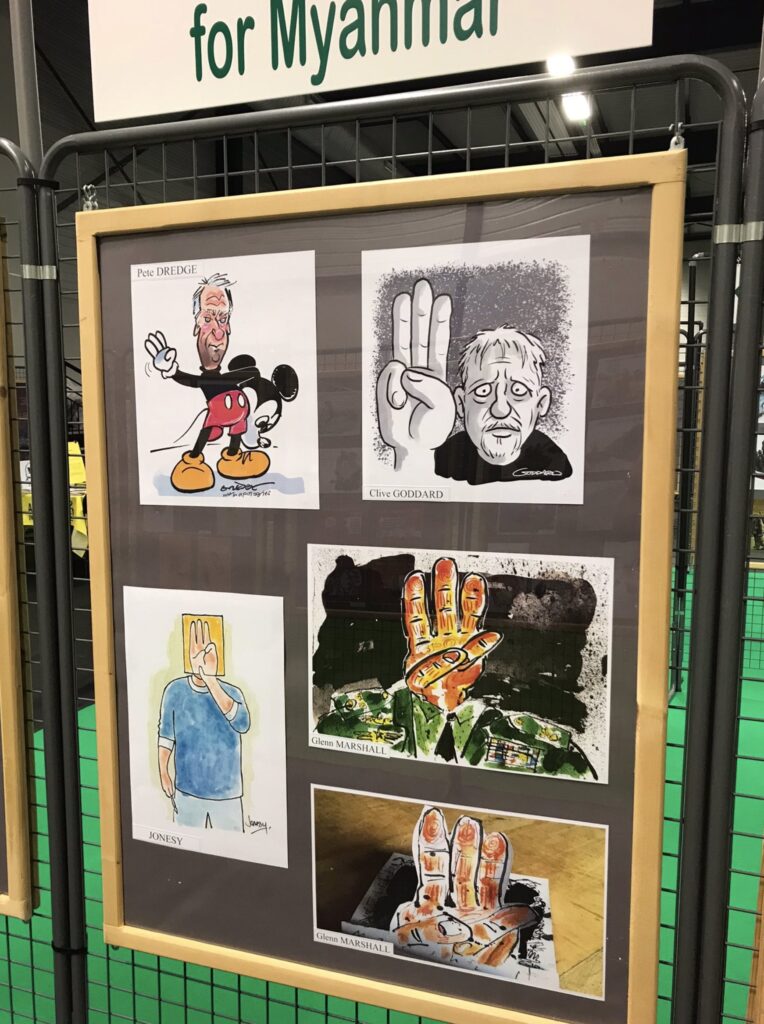 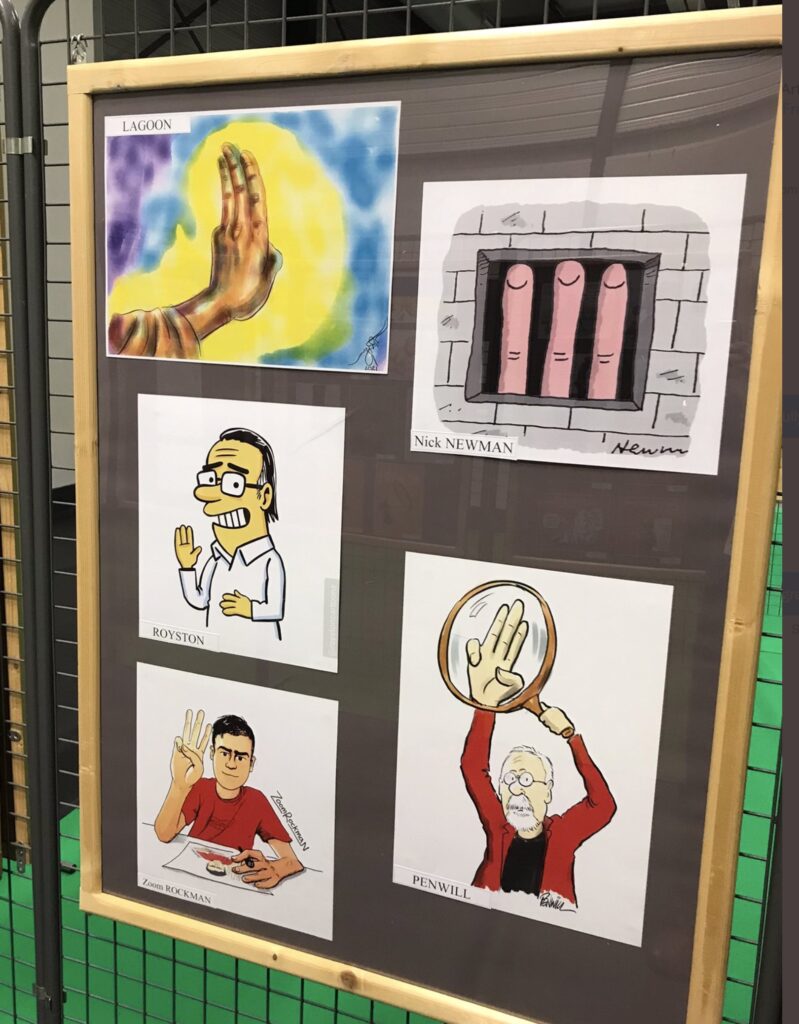 The ‘Raise Three Fingers For Myanmar’ exhibition is a collection of three finger selfies drawn by PCO members in solidarity with our colleagues from the Myanmar Cartoonists’ Association and includes work from Waiyan Taunggyi and Lagoon Eain, two Myanmar cartoonists currently living in exile. 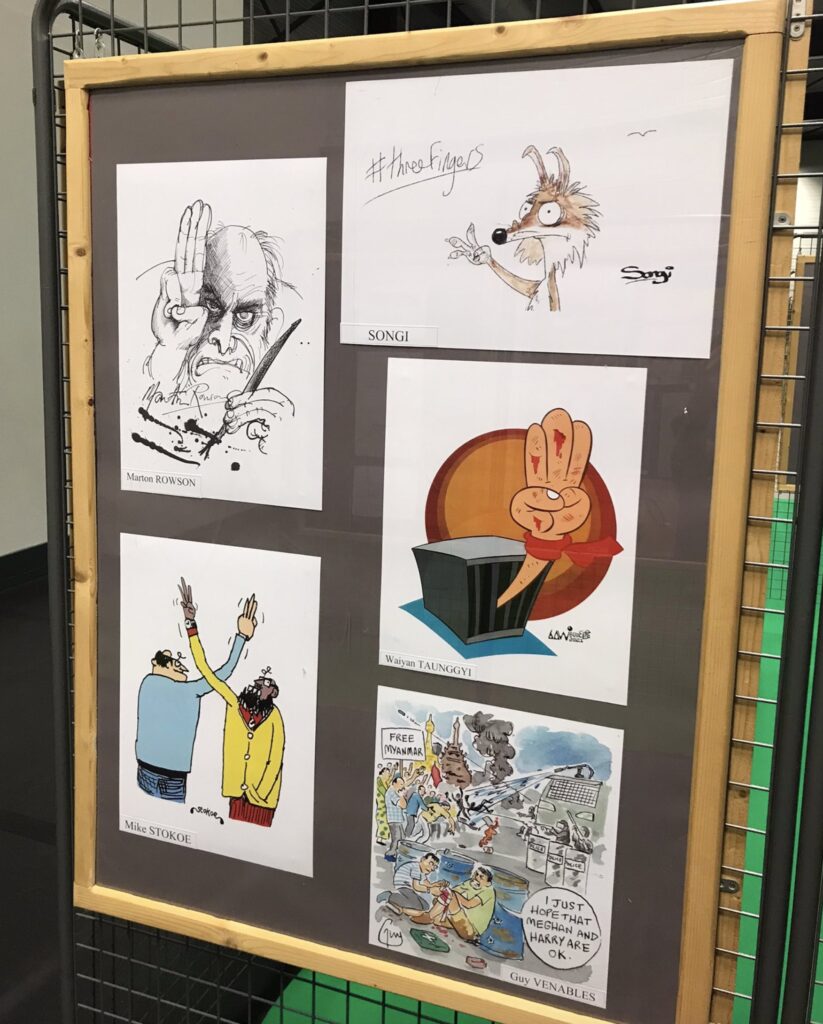 The PCO hopes that the ‘Raise Three Fingers’ exhibition will help keep Myanmar from being pushed from the public’s consciousness.’

Congratulations to Terry too as he was recognised at the festival by the Salon de la Caricature du Dessin de Presse et d’Humour for his work in the defence of cartoonists’ rights around the world.

PrevPreviousHow did you get started in cartooning?
NextThe Shrewsbury International Cartoon Festival comes to an endNext