Terry Anderson updates us on a touring exhibition:

After an amazing year The Auld Acquaintance, the Scottish Cartoon Art Studio’s touring exhibition about the independence referendum, has made its final stops in Lleida, Catalonia, and Limoges, France.

The exhibition was shown at the Institut de Estudis Illerdencs in Llieida.  Although the smallest and briefest iteration of the exhibition, it was incontestably in the most attractive venue. The IEI is a stunning Gothic building in the centre of Lleida, a former infirmary complete with courtyard now used as a multipurpose exhibition and performance venue and library. 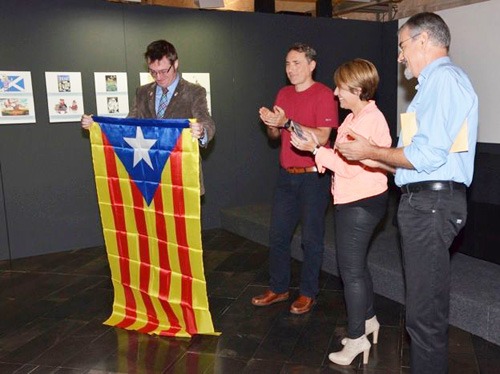 On the opening evening I was presented with an estelada, above, by Rosa Pujol, the IEI’s deputy director, and by the political cartoonist Ermengol, the main host for the event, whose work appears daily in La Mañana.

Limoges is the last stop on the exhibition’s tour of Europe in 2014. The exhibition will continue at the university until 14 November.

Thanks to all who have lent their support, including the PCO. Among the  cartoonists whose work was shown were Procartoonists.org members Gary Barker, Steve Bell, Steve Bright, Dave Brown, Chris Cairns, Andy Davey, Bill Houston and Malc McGookin.