Neil Hepburn aka Beau Bo D’Or continues his explanation of the art of digital image making.

I didn’t set out to do what I’m doing now. After many years doing a desk job where the most creative thing I did was my expenses, things went tits up for me and, while unemployed and waiting for letters of rejection to come in, I amused myself messing around with a copy of the poor man’s Photoshop, a program called Paint Shop Pro. 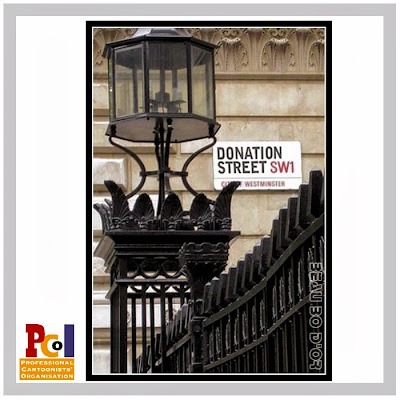 I set up a small website and started to get a bit of unwanted notoriety for what I did. I wanted to ease the process of updating the website, so I decided to use blogging software. This had unforeseen consequences, mostly good. Posting images became simple, hits went up (incredibly) and some media outlets came to visit.
I’ve had a couple of regular paid gigs (for static, mashed-up photographic images) as a result, but I believe the first proper one, for a national newspapers’ website, was offered for all the wrong reasons. Let me explain why I think this was the case.

One, I feel I may have got the job because the newspapers’ competition was also using my images (infrequently).

Two, I think the website wanted to differentiate itself from the newspaper by using digitally created cartoons, assuming that style of content should reflect the medium. I think it is pretty naïve to let the medium dictate style of content, especially when it is used to ‘declare’ that your digital product is different from your newspaper counterpart.

Brian Sewell once universally condemned ‘virals’ (viral joke or marketing emails) making the same related confusion between content and method of delivery (or access) that the former newspaper client made. If Sewell had made the same error when discussing his ‘type’ of art then he’d be slagging off gallery walls.

I’m sure there is a broad range of opinion on the validity of what I do but, as I said in my previous blog post, I kind of fell into this, whatever you may describe it as.

I think there is confusion amongst some cartoonists about what I attempt to do. Perhaps it is thought of as a shitty bit of cut and paste hurriedly done at a newspaper to do you lot out of some much-needed revenue. While some may choose to believe this, I believe this time is wasted, having a pop at the wrong people and failing to improve the situation with those who actually matter.

Even if you work out the correct target, having a pop at them directly, in the pub with friends or in a walled garden of your peers will do bugger all. If you make your work accessible – more accessible and visible to both the public and media – maybe they (the commissioning editors) will start chasing you.