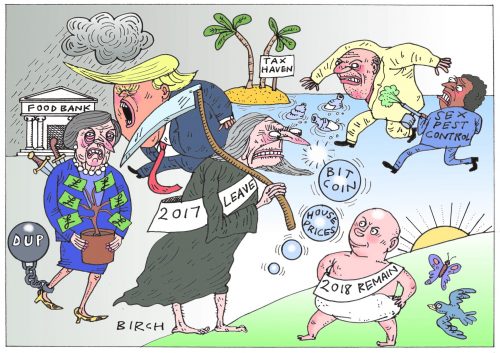 Everyone else is doing it so we thought we’d have our own look back at the year…with cartoons by PCO members. The Big Issue drawing above by Andrew Birch manages to fit the whole year into just one cartoon! 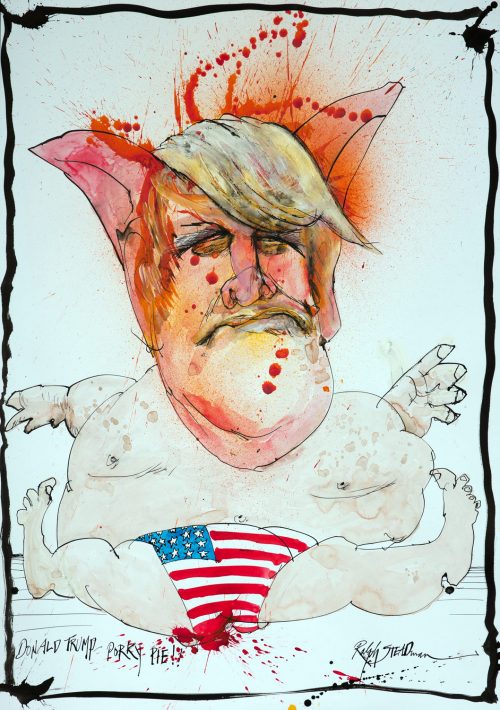 We started the year with Trump’s bigly attended inauguration. Trump was undoubtedly (Mad) Man of the Year although he was closely followed by Kim Jong-Range Missile. This flattering portrait of Trump is by the inimitable Ralph Steadman. 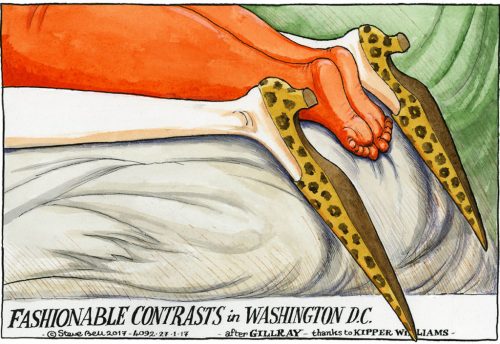 At the beginning of the year Theresa May visited Washington to hold hands with The Donald. This cartoon from Steve Bell on the ‘special relationship’. You can see more of Steve Bell’s favourite cartoons of the year on the Guardian website. 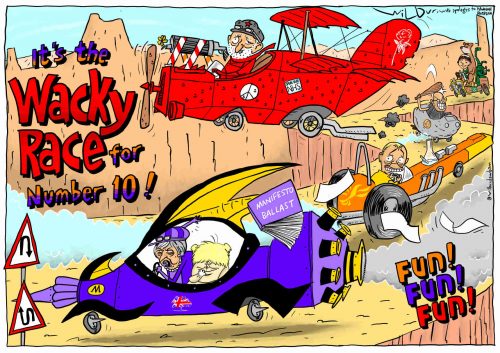 June saw Mrs M making another bad decision in calling a snap election. Who’d of thunk this would turn Jeremy Corbyn into a headline act at Glastonbury! This on the election race by Private Eye regular Wilbur Dawbarn. 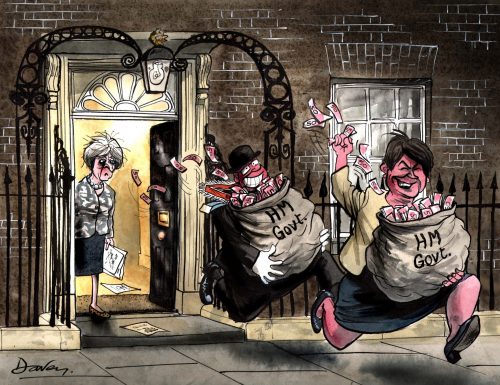 The election didn’t go too well for Theresa. Here’s Andy Davey on the costly deal she was forced to do with the DUP (from The Indy). Unsurprisingly the figures weren’t heralded on the side of a bus. 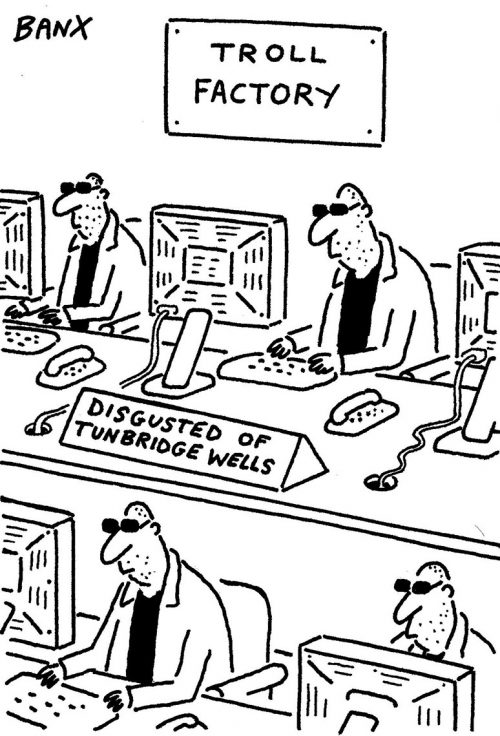 Russian cyber interference in overseas elections has been a big story in 2017. This cartoon by FT cartoonist Banx. (although this could easily be a drawing of The Daily Mail newsroom) 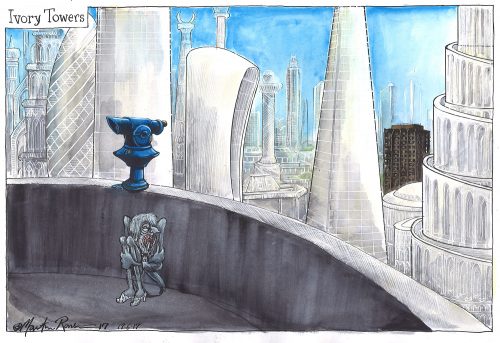 In June we had the terrible fire at Grenfell Tower. This is Martin Rowson’s response in The Guardian on the Government hiding from responsibilities. 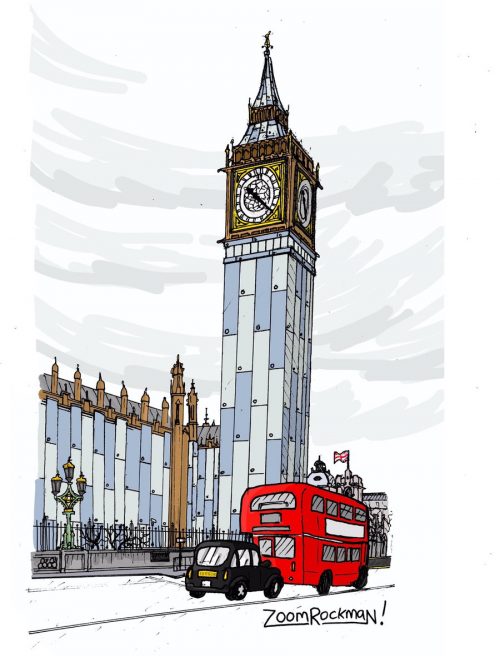 …another illustration on Grenville Tower by prodigious talent Zoom Rockman taken from Private Eye. ‘Things That Wouldn’t Happen’. Would the House of Parliament use cheap cladding for the renovation work? 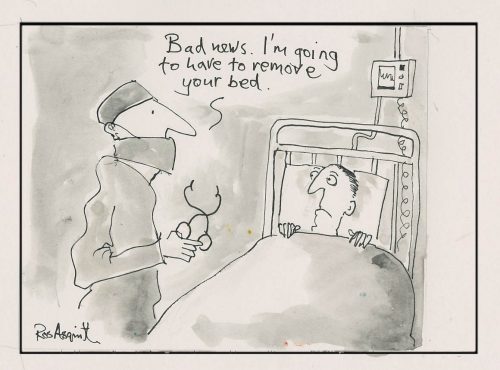 The NHS is still desperately underfunded. This was a very funny cartoon by Ros Asquith after doctors warned in July about Government plans for ‘brutal’ NHS cuts. 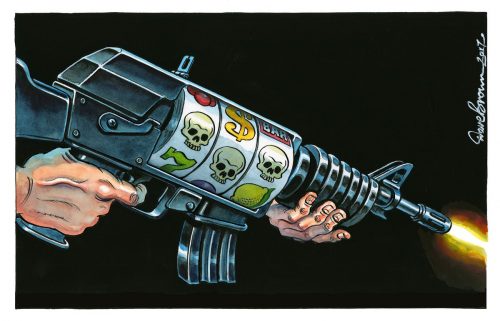 October started with the awful mass shooting in Las Vegas – one of many atrocities in 2017. This was Dave Brown’s reaction in the Independent. 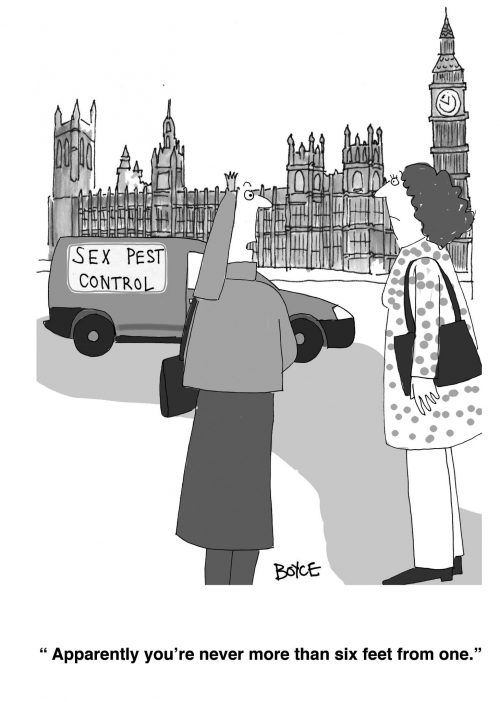 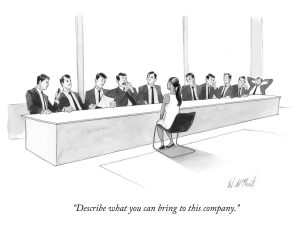 Workplace equality has also been an issue throughout the year. This perfectly summed up in a Private Eye cartoon by New Yorker regular Will McPhail. 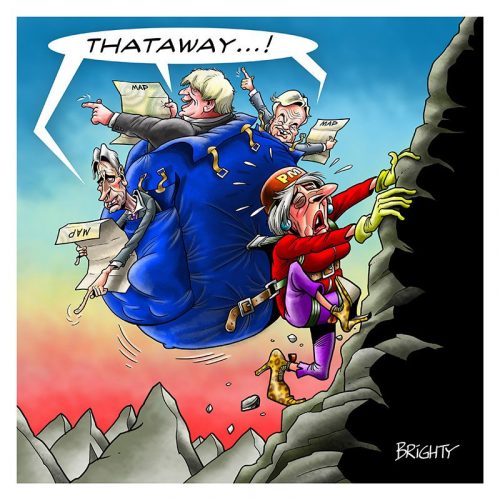 We couldn’t review the whole year without mentioning B****t. Here’s a fine summing up of how negotiations are going by Brighty in The Sun. 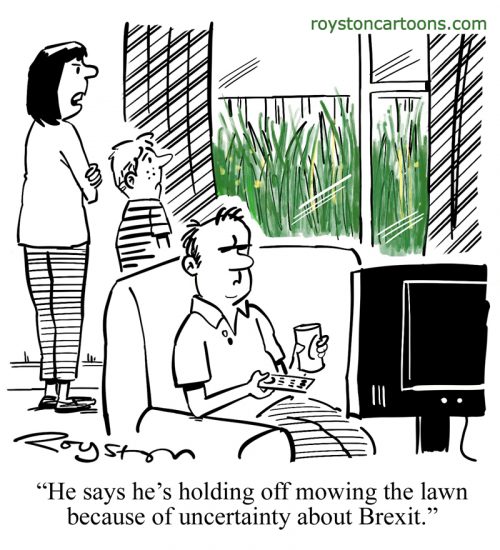 …we have though restricted ourselves to just two on the ‘B’ word. This corker by Royston published in Private Eye. 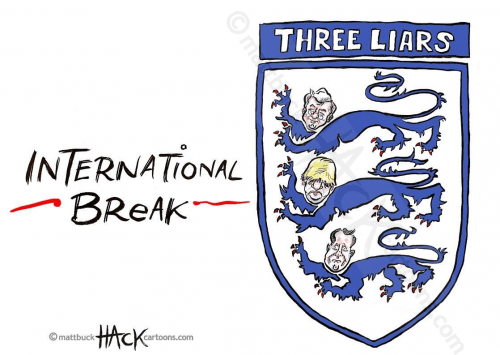 Ok, that was an ‘alternative truth’ we now have three ‘B’ word cartoons, this from Matthew Buck for Tribune. 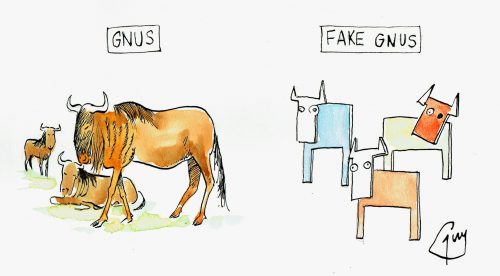 …and on the same subject word(s) of the year was ‘Fake News’. This take on it from Guy Venables in the Private Eye 2017 Annual. 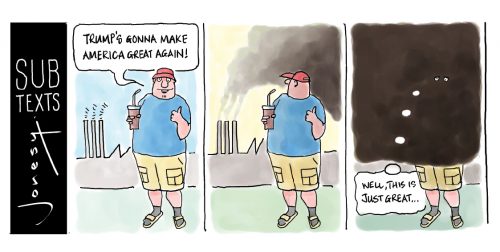 Trump has recently been denying global warming again because the East Coast has had a bit of a heavy cold spell. Here’s a strip on Trump’s view on climate change by Jonesy (from Resurgence & Ecologist magazine) 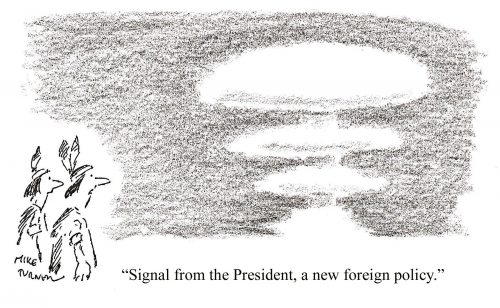 Finally, on a rather apocalyptic note to end the year, this is from Mike Turner in The Spectator.

Happy New Year from the PCO…although I suspect 2018 will be another year of global calamity and abject misery – at least we’ll have plenty to draw cartoons about.