With Storm Hannah due to roll in threatening rain and high winds the marquee company wouldn’t put up the festival’s gazebo roofing. Fear of airborne ‘para-boarding’ cartoonists made the festival organisers hastily arrange a Plan B for Saturday, which involved us decamping to the local Darwin Shopping Centre (every third business in Shrewsbury seems to contain the word Darwin)

A distant Steve Bell in front of a crowded audience. Photo © Jonathan Cusick.

Before that, on Friday evening Guardian cartoonist Steve Bell returned to the festival and spoke to a packed and enthusiastic crowd at the University Centre. Surveying his use of animals throughout his career, he picked out highlights including the penguin from his ‘If’ strip and ended with a few live drawings including his toilet-headed Trump. After twenty minutes of audience questions he signed copies of his latest book. A real treat for cartoon fans and definitely one of the highlights of the festival. 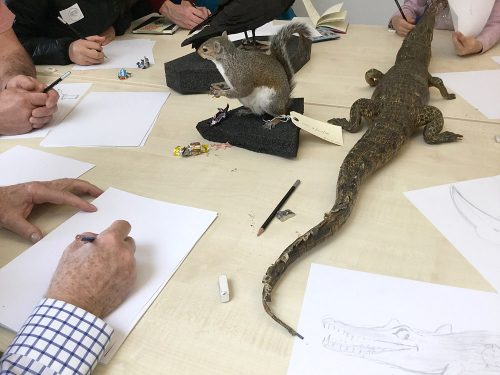 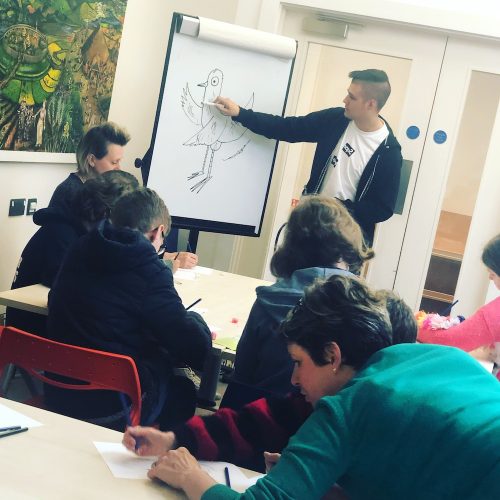 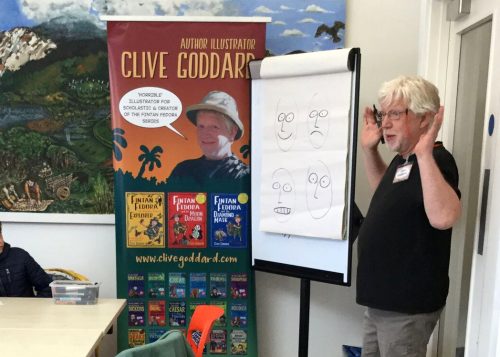 There were also well attended indoor talks by The Surreal McCoy and TWO by Clive Goddard (above) nothing to do with folk wanting to get out of the bad weather. Photo © Alison Patrick. 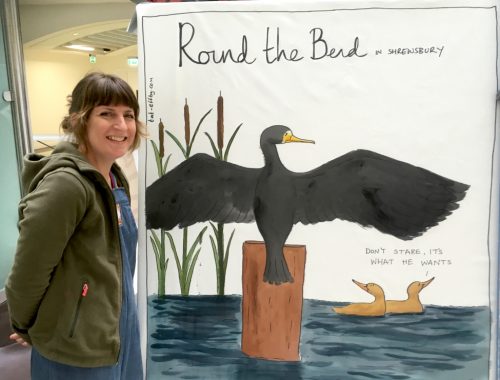 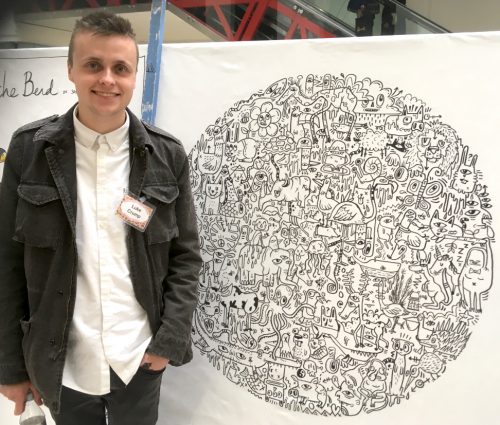 Luke Crump with one of his incredible ‘doodle style’ creations. Photo © Clive Goddard. 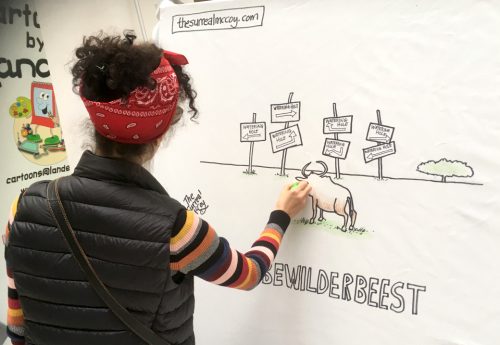 The Surreal McCoy hot-footed over from her ‘Wolf of Baghdad’ talk to fit in a board before hot-footing off again to join the ‘festival music ensemble’. Photo © Clive Goddard. 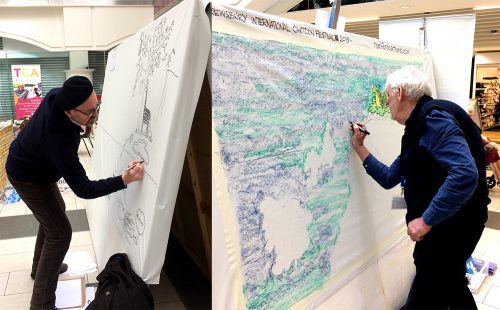 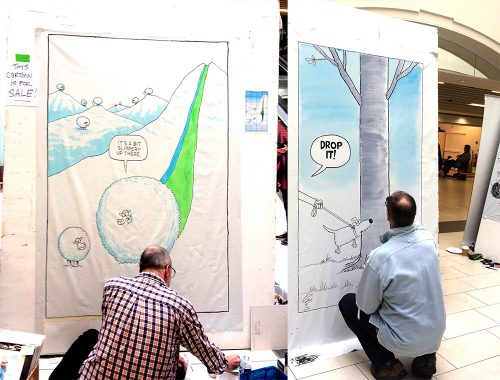 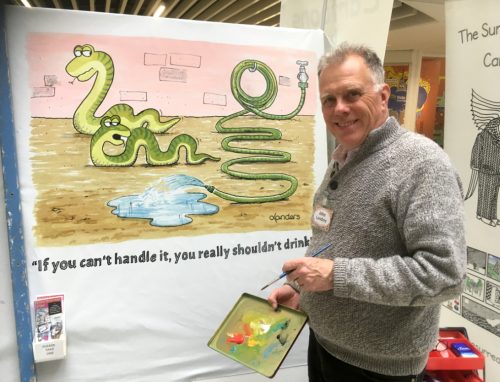 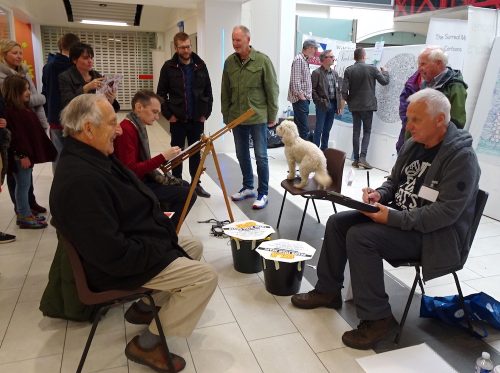 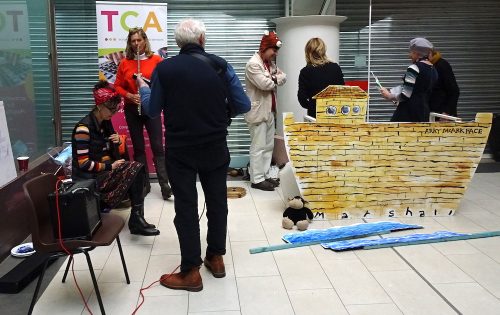 The 30 second rehearsal before the launch of The Shrewsbury Cartoon Players and Puppeteers inaugural performance of ‘The Animals Went In Two By Two’. Photo © Tat Effby. The Noah’s Ark was ironically moved indoors even though it would’ve been perfectly suited to the biblical weather conditions. 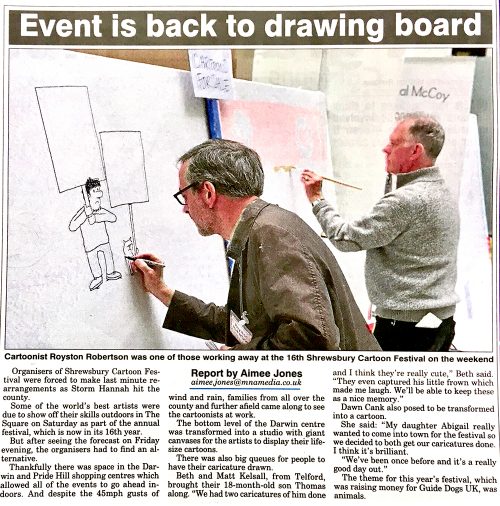 Royston Robertson featuring in the festival write-up in the Shropshire Star. 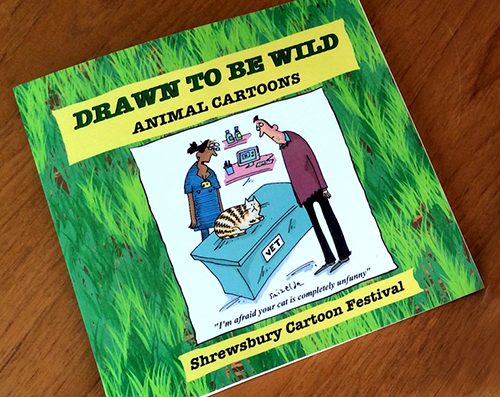 The festival produced a book of the ‘Drawn To Be Wild’ exhibition cartoons which is still available here price £9.95 + postage.

Thanks to all the organisers and sponsors for another successful festival that went down a storm.