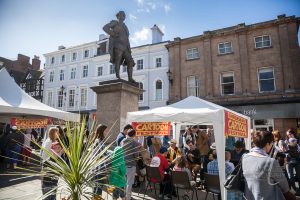 Sadly, I could only attend for the Saturday session because I had to get back for my venerable dog, but it was a cracking day’s cartooning and caricaturing nonetheless. Amazingly, the A49/41 were almost lorry – free and the only real hold-up was courtesy of a nitwit in a woolly hat piloting a Nissan Micra. But I got to The Lion in time to hear Roger P deliver the briefing. Its been a couple of years since I was at The Lion and I’d forgotten how much I like it. It has none of the anodyne anonymity of “corporate identity” and remains an ancient, creaky one-off. 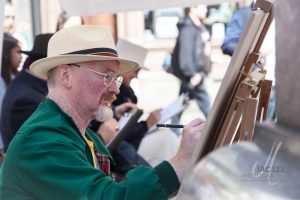 Briefing done, I walked up to the Market Square with Glenn Marshall who was weighed down with all manner of humour tackle – so to speak – but more of that later. Tireless Bill McCabe and helpers were busy finishing Big Board surfaces and the caricaturing tent/marquee/thing – which was full all afternoon. Despite quite a few of those already there having been on curry duty on Friday evening, nobody looked ill and Brighty appeared sporting what can only be described as an extreme haircut. A ginger gooseberry came to mind. But pretty quickly, Brighty, along with FIVE other caricaturists was hard at it, eliciting songs of praise from the public. “Look ! He’s made it look like ME !” Well of course he has, you silly youth. 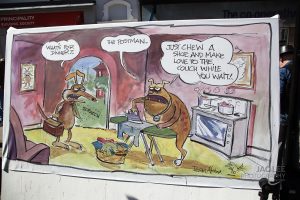 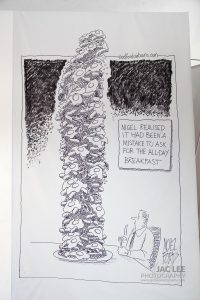 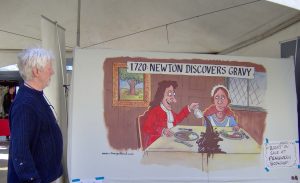 Big Boards came on apace. Fastest was probably Dean Alston, the well-known professional Australian, whilst the aforementioned Michelin Marshall was busy turning out cartoon meals, as Noel Ford drew a six foot high pile of beans, eggs, sausage and chips. Over the years, I’ve developed the habit of listening to what the public say behind me. This year’s winner was from him to her, as in ; “Well yes, I suppose it is quite good, but somebody probably tells them what to draw.”

A small army of helpers kept us supplied with tea and coffee of various colours, whilst really capable local musicians filled the Square with songs we all knew some of the words to. My favourite was the Banjo/Ukulele Lady. That’s a person, not a song.

And all of this with no financial help from The Council. They’re broke. Thanks Tories. All the cartoonists, caricaturists and musicians did it for free. Were there any UK publishers present ? No, there were not. They really don’t know what they’re missing. 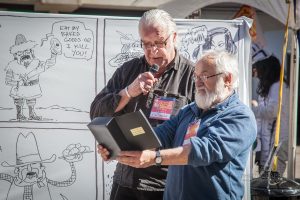 Finally – for me at any rate, because as soon as we’d all finished I had to zoom back up the A41, the PCO made a presentation to Bill McCabe who has been ever-present almost from day one sorting stuff. His award was for “services to cartooning”. I think he was pleasantly surprised. The presentation item was an oh-so-tasteful crystal –ish block thing which weighed half-a ton. “ 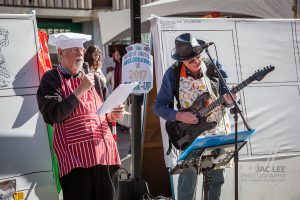 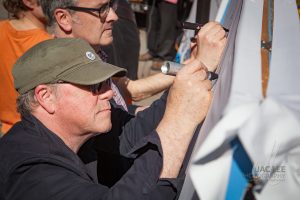 Hunt Emerson, Royston Robertson and a bit of Wilbur Dawbarn. The trio cooked up the Melodrawma side dish. Photo ©Jac Lee

We’re indebted to photographer and cartoon doodler Jac Lee for most of the images. (More can be seen on his link)