The Herne Bay Cartoon Festival is under way and is promising the usual fun in the sun with plenty of laughs for its ninth event. 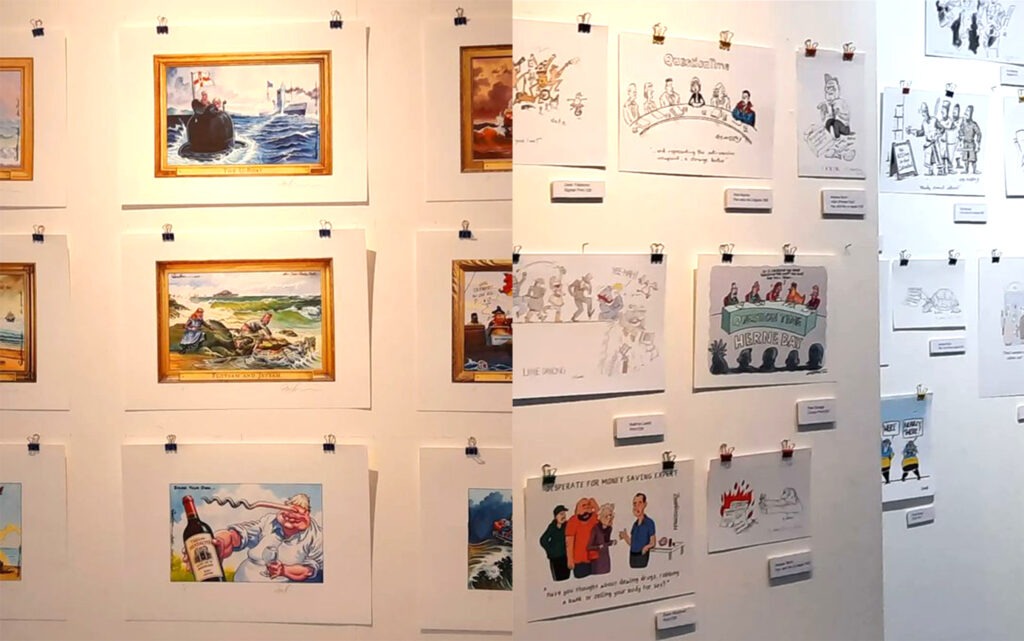 Some of the walls at the Beach creative exhibition.

This year’s theme is “Crossing the Line” and an exhibition with that title is now on at Beach Creative, Beach Street, Herne Bay, CT6 5PT, until 18th August. It is open daily 10am-4pm. It features a huge variety of gags and political cartoons responding to the theme, from PCO members and others. 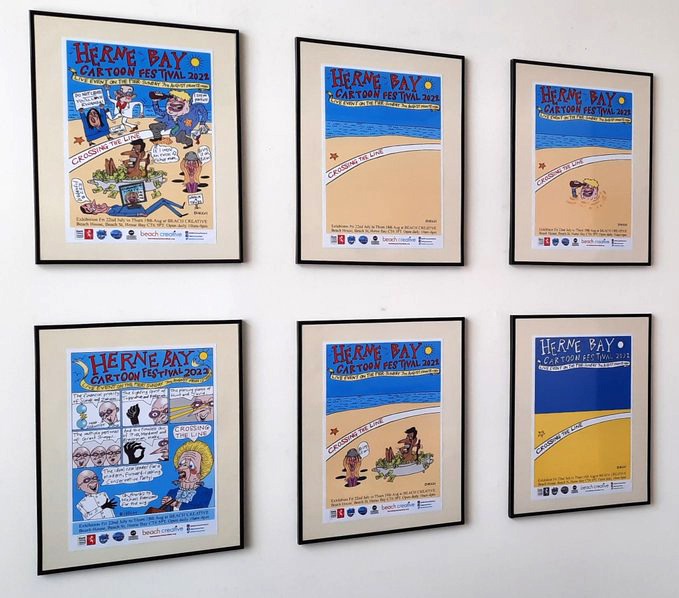 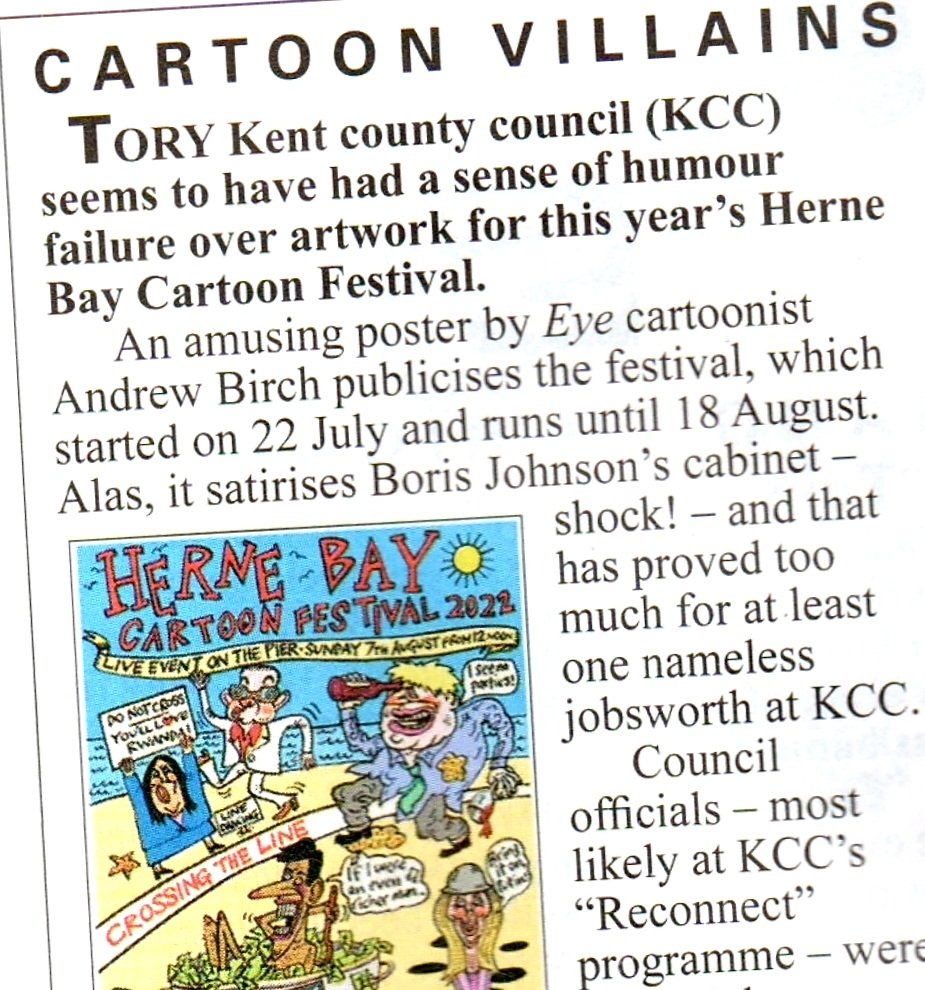 The poster story as it appeared in Private Eye.

The show features a mini-exhibition of variations on Andrew Birch’s poster for the festival. Various cartoonists posted altered versions of the poster online as the Tory leadership contest unfolded. The poster was also at the centre of controversy when Conservative-led Kent County Council appeared to take offence and an official in the organisation asked for its sponsorship logos to be removed. Check out the news pages of the latest Private Eye for details on that. 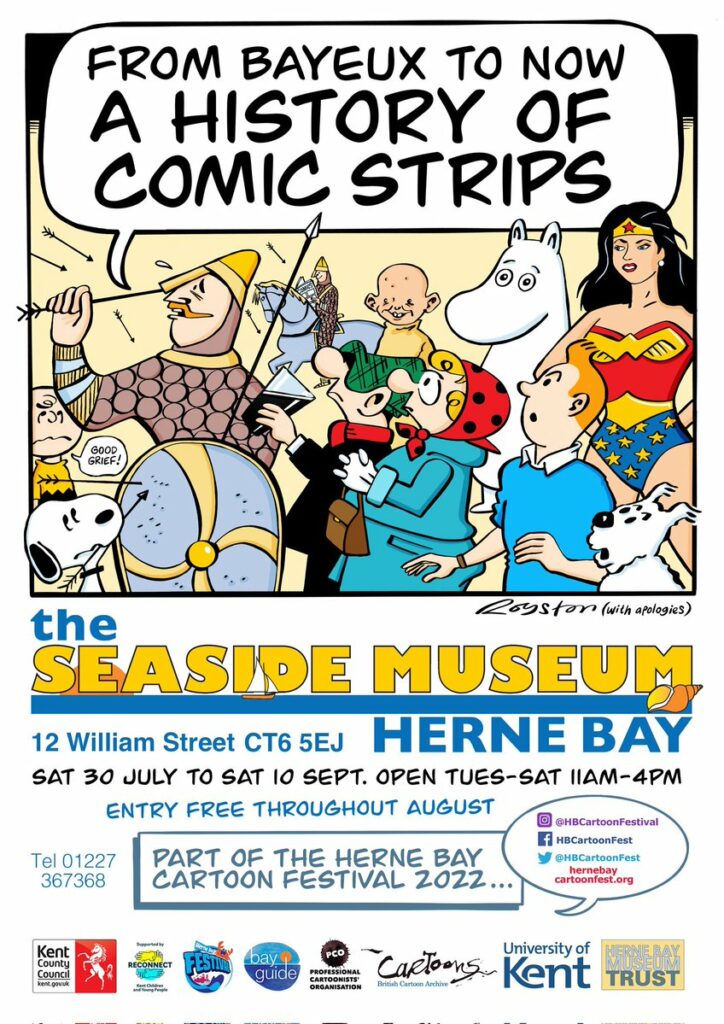 An exhibition called “From Bayeux to Now: A History Comic Strips”, curated by cartoon festival founder Sue Austen, is also now on at the Seaside Museum, 12 William Street, Herne Bay CT6 5EJ. Featuring drawings from the British Cartoon Archive, it runs until 10th September and entry is free throughout August. It is open Tuesday to Saturday 11am-4pm.

There will be private views at both the Seaside Museum show and at Beach Creative from 6pm on Friday 5th August. 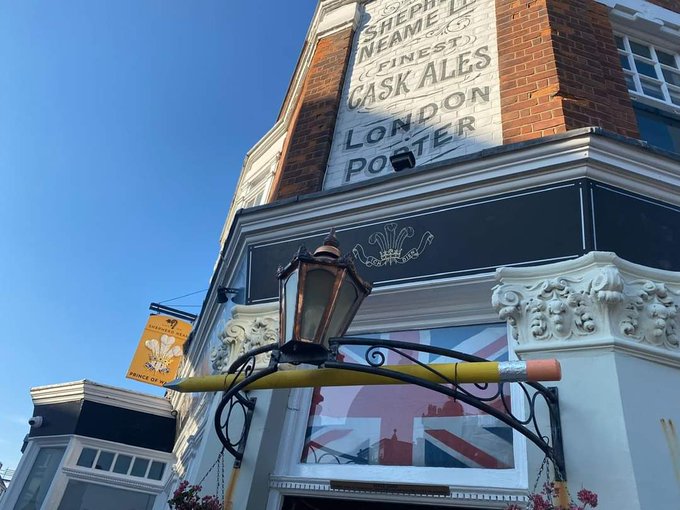 As is tradition the festival pencils have been strategical placed around Herne Bay.

The festival’s live event will once again be on Herne Bay Pier on Sunday 7th August from 12 noon. Cartoonists attending will be drawing big board cartoons, seaside peep boards, caricatures and creating a big strip cartoon.

As if that’s not all enough, cartoon workshops funded by the Herne Bay Festival, Reconnect and Kent County Council are also part of the festival. Tim Harries will host “Creating Comic Strips” at the Seaside Museum on Friday 5th August at 3pm, to tie in with the show there.

Zoom Rockman will host a workshop at Beach Creative on Saturday 6th August, 11am until 12.30pm. This will involve attendees making their own paper puppets and filming them together against a green screen background. Zoom will then superimpose the footage onto an image of Herne Bay and the plan is to put the resulting film on social media and send it to participants and parents of the children who take part. Everyone will leave with a puppet they made.

Cartoonist and children’s book writer and illustrator Clive Goddard is hosting a “Cartooning for Beginners” workshop at Beach Creative on Saturday 6th August at 2pm.