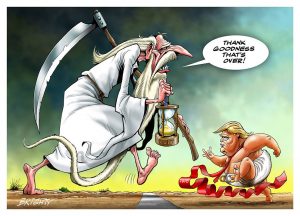 As is tradition, here is our review of the year featuring cartoons by PCO members and when I say tradition I mean we did it for the first time last year.

The Brighty cartoon above was done to introduce last year but is sadly still very true for the end of 2018.

If you can’t bear any more mentions of Brexit or Trump you’re advised to look away now! 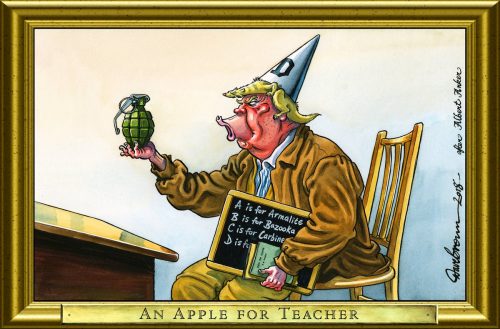 After the terrible Florida school shootings towards the beginning of the year Trump’s well considered proposal was to arm teachers. This was Dave Brown’s response in his ‘Rogue’s Gallery’ drawing for The Independent. 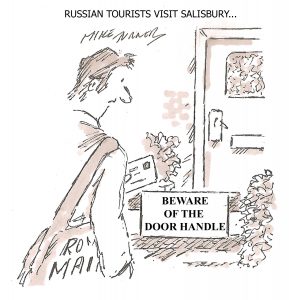 Salisbury received a tourism boost in March when visited by two Russian holiday makers. Here’s a cartoon of Mike Turner’s on the Novichok nightmare. 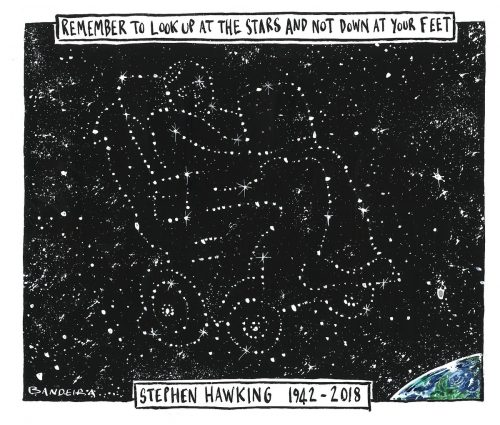 March also saw the relativity sad news of Stephen Hawking’s death. Graeme Bandeira paid cartoon tribute to him in The Yorkshire Post. Our quarks are with Stephen’s family. 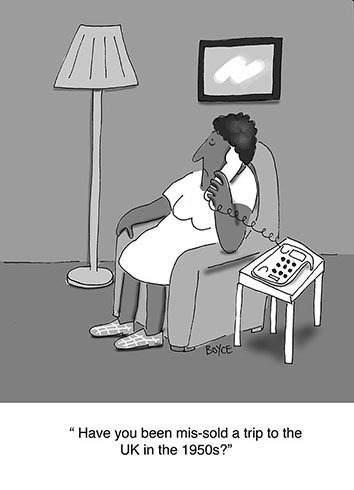 In April the Home Office become Rudd-erless after the Windrush scandal erupted. This by Sarah Boyce published in Private Eye. 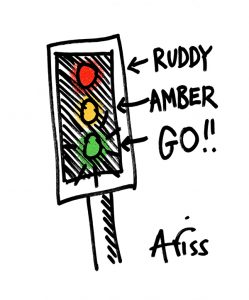 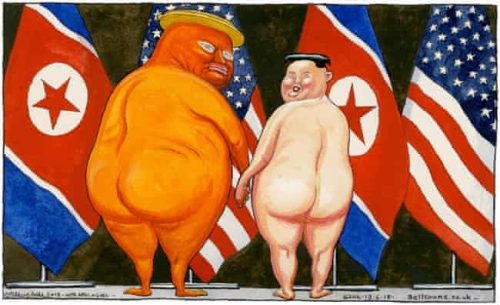 In June we had the start of the Donald/Kim love-in as they met in Singapore. That moment captured here by Steve Bell in The Guardian. 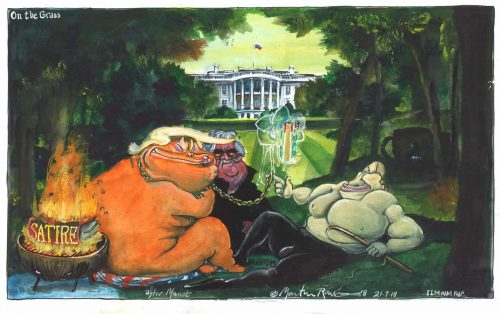 Then in July The Donald asked his administration to invite his other love interest Vlad Putin to the White House. The moment foretold here by Martin Rowson also in The Guardian. Of course the person Trump loves more than anyone else is Trump himself. 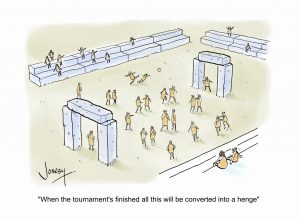 The nation went into shock in July when England actually preformed well AND won a penalty shoot out in the World Cup!!! This was a favourite football tournament themed cartoon by Jonesy (used in Private Eye). 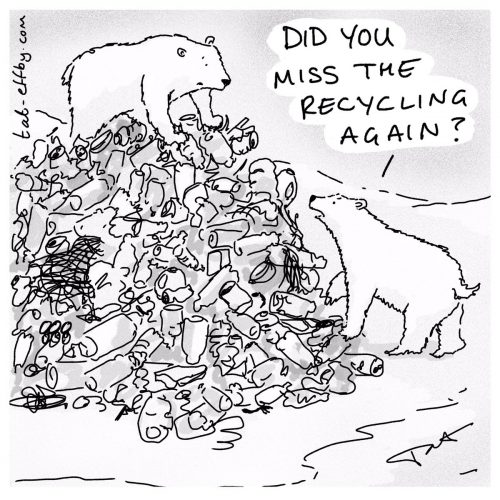 There’s been much in the news this year about climate change and plastic in the oceans. Here’s a fine cartoon I’ve recycled on the subject by Tat Effby. 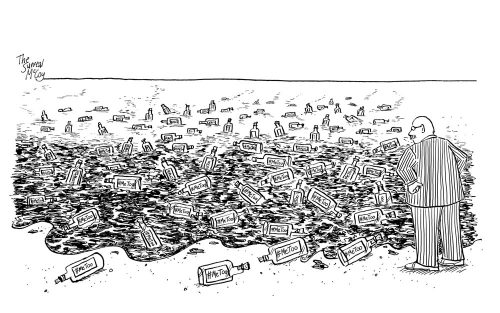 The Surreal McCoy also took to the oceans with this message on #MeToo. 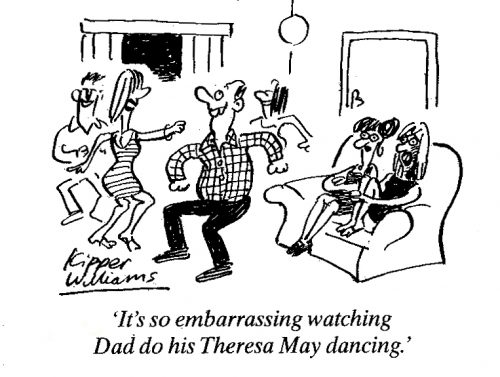 In August Theresa May started thinking of life after being PM when she put in a ‘Strictly’ application by throwing some shapes, mostly Isosceles triangles, on her tour to South Africa. This from Kipper Williams in The Spectator. 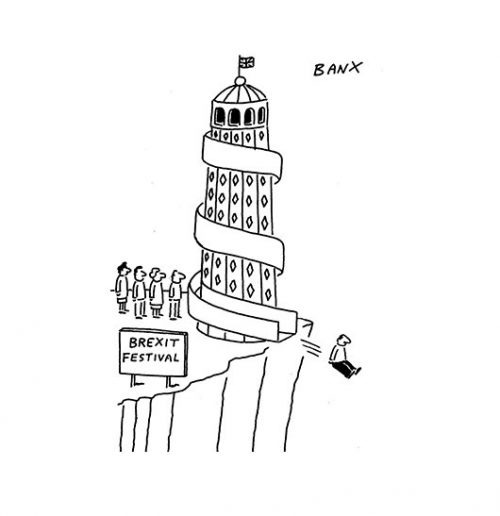 In September the Dancing Queen announced at the party conference in Birmingham plans for the ‘Festival of Brexit’. This Jeremy Banx cartoon in the Finacial Times became very popular on social media. 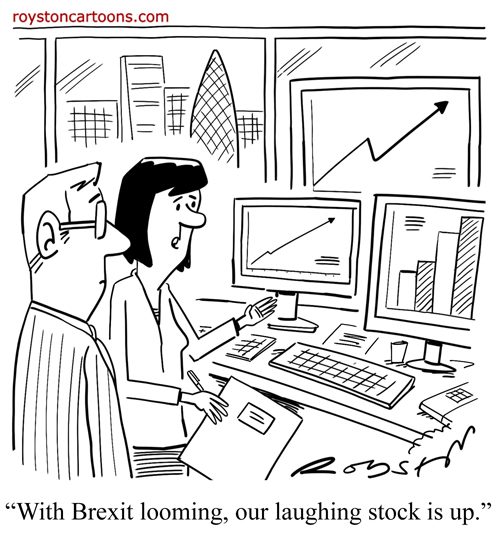 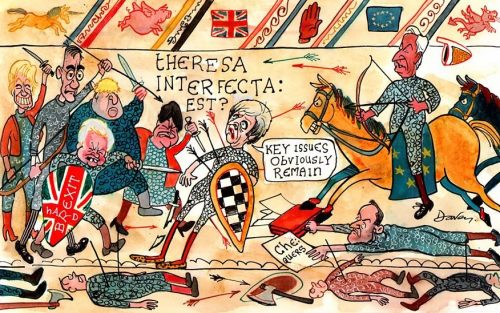 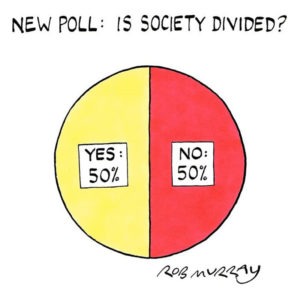 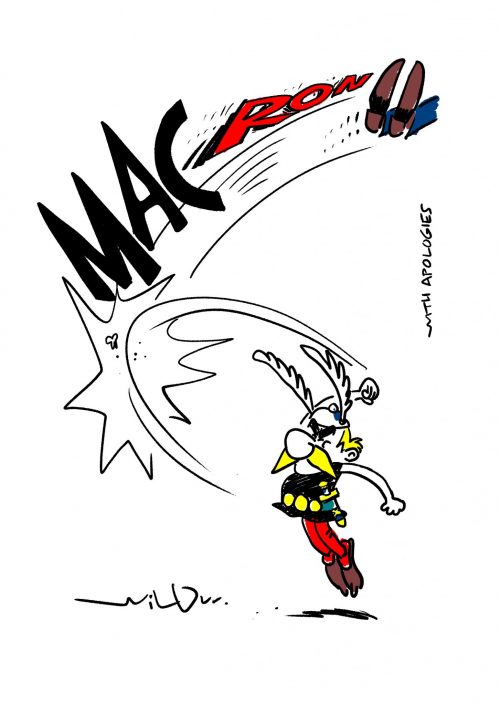 It’s not only the UK that’s been in turmoil, across in France they’ve had gilets jaunes fever. This Gauling cartoon by Wilbur Dawbarn. 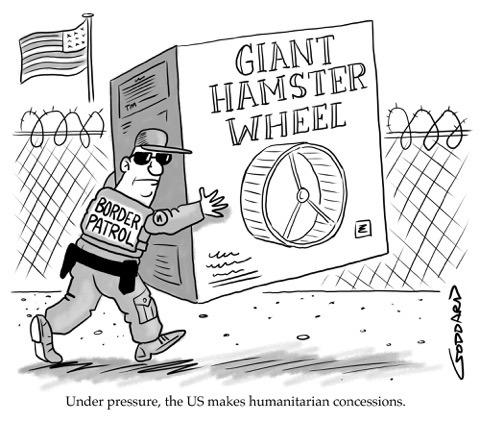 As the year ended Trump closes down the US government to try and force through funding for his election promise to ‘Build A Hamster Wheel’. This just in from our correspondent Clive Goddard. 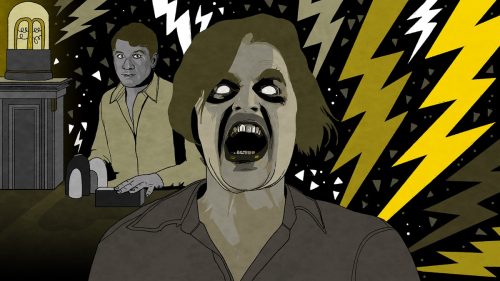 This illustration by Rebecca Hendin has NOTHING to do with the year (it was drawn for the BBC Culture series ‘Stories That Shaped The World’) but I think it sums up 2018 perfectly…a sort of contemporary Edvard Munchian existential scream. 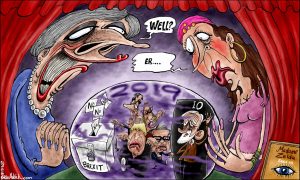 …and in The Guardian new PCO member Brian Adcock digs out his crystal ball to predict what might happen in 2019…yep, more of the same.

Happy? New Year from the PCO